In our efforts to keep sailing active as we move into the autumn we decided to run a different style of race. This race was planned to allow an interesting but shorter race than East Mouse and back. To organise the various starts for this race we asked the skippers to test their navigational skills and decide when they should start, providing start and finish times so that we could use the calculated elapsed times for the race results. The race course was set as follows: 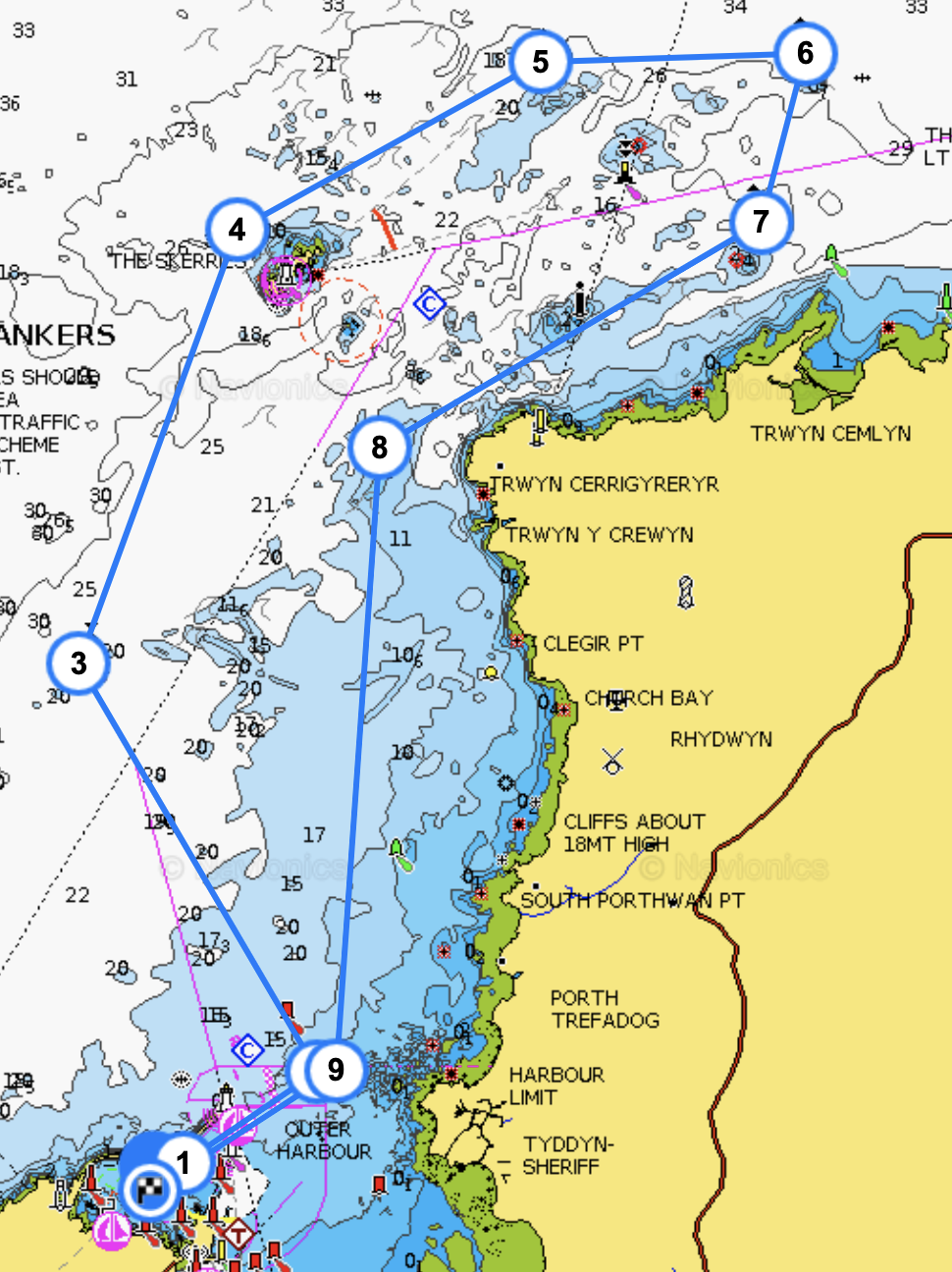 There was a big queue for the launch which meant that some of the racers didn’t get to their vessels as early as they had intended, I hope this didn’t affect their planned start times!

With a forecast for moderate 14kt NE winds I had arranged a complex course staying within close proximity to the harbour rather than going on a very long beat to Bolivar. With no Penrhos Mark I had included the first of the marks leading into the inner harbour. 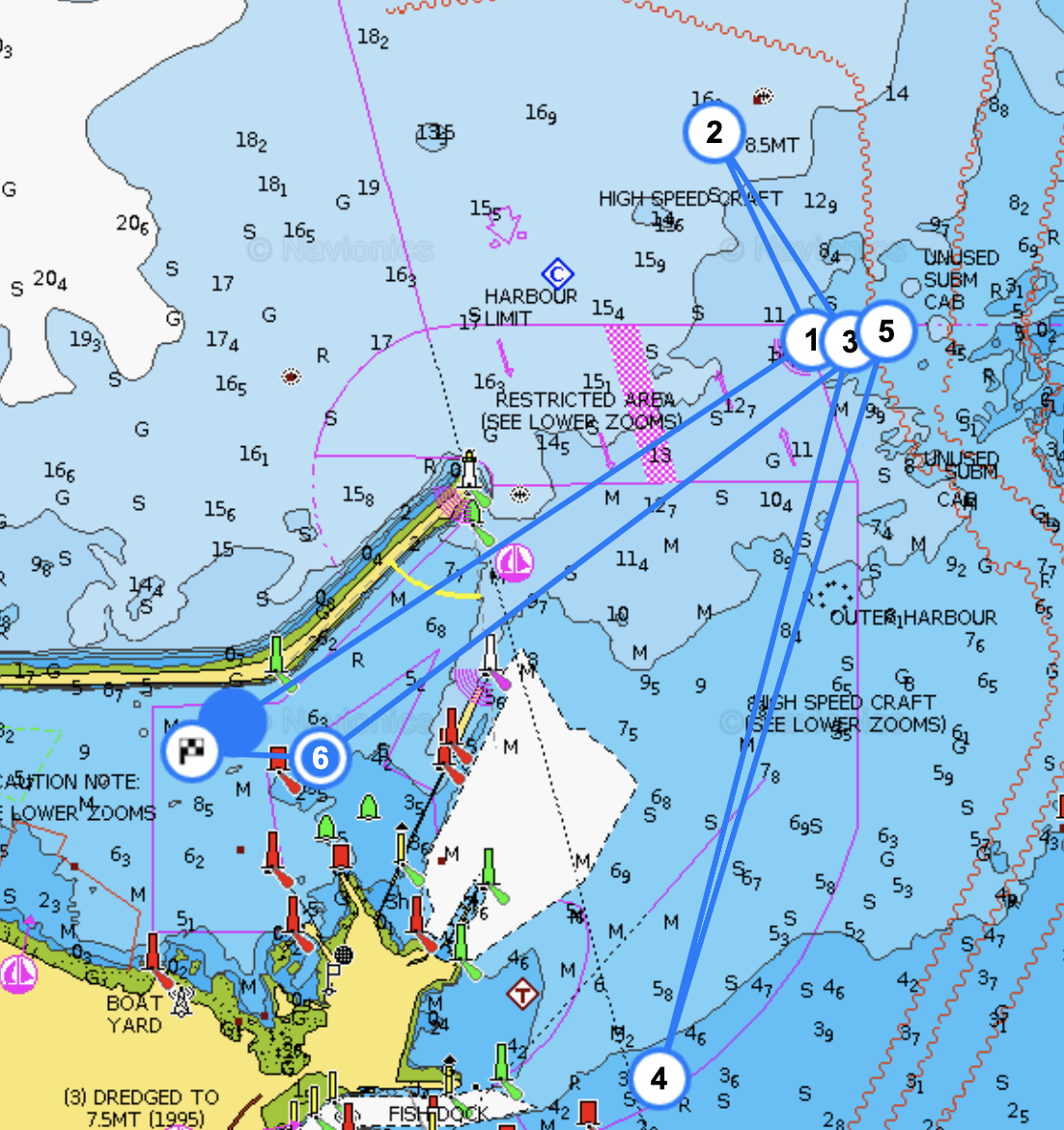 This image with the rounding directions were announced on the WhatsApp group and I was looking forward to a pleasant evening of racing. As I drove to the club I was aware that the forecast was not in the right ballpark when it came to the wind! This was proved to be quite different from the 14kt on Windy.com earlier in the day and the launch ride out to Flair was to say the least bumpy!

Our second race for the 2020 season; just great to see more boats on the water with a warm though not quite how I would describe the weather at the time, welcome to club racing for Digby plus crew on Kahuna and Liz and Alan on Soulmate.

Conditions were interesting with variable light winds as we prepared for the race with a spectacular rainbow spanning the harbour entrance, as usual I was too busy to capture this, taking the opportunity to sail round the moorings to check that everyone was aware of the arrangements for the race and that they were tuned into VHF Ch17. As I was attempting to contact the racing fleet there was some annoying radio chatter, all in what I perceived to be Chinese, making me query the choice of Ch17. Fortunately the chatter didn’t last too long and I was able to manage the start sequence with reasonable accuracy.

Without the club mark ‘Penrhos’ being in place and with the SW wind the course selected was the same as last week’s course 12. This would give us an interesting comparison between the states of tide and wind between the two sets of data. The following two screenshots are of Flair IV’s track the first is for the 29th then the second is both the 22nd and the 29th with the 29th highlighted. 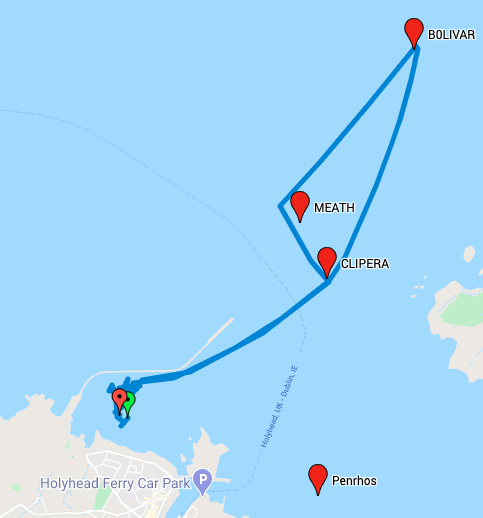 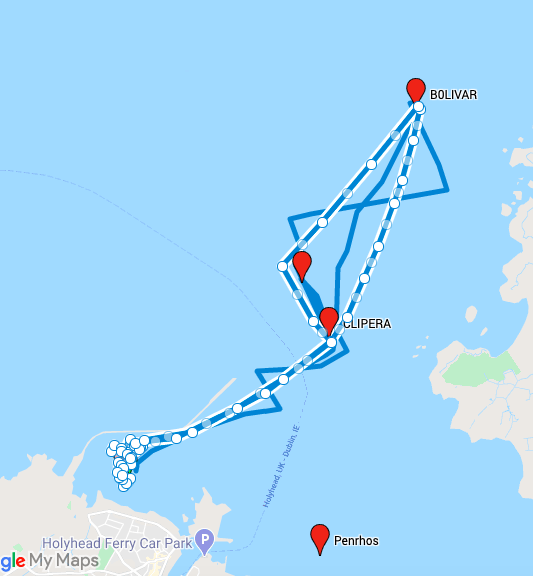 I look forward to hearing your views on why these are so different!

Phil could be heard shouting at Flair to say she was going to be over the line, but no she actually got just about the perfect start with her old dacron cruising jib replacing the carbon racing sail that suffered in the previous week.

Gradually as the yachts headed out of the harbour Flair IV drew away from the rest of the fleet with winds ranging from 6kt to 10kt on a broad reach. These pictures are from Sue (Commodore) James who was onboard with Trevor on Kataya 2 shadowing the event. 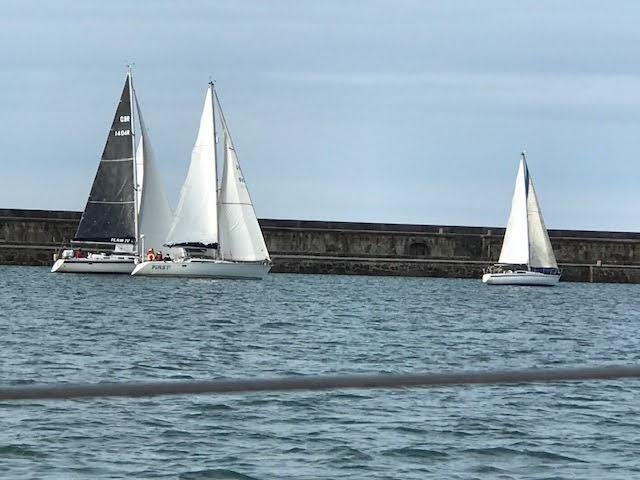 Before the start with Kahuna close to the line 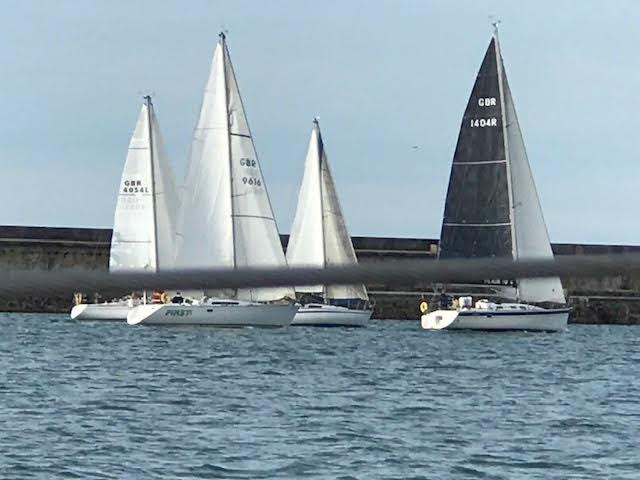 Just after the start with Flair breaking free from the lea of Incantation as they approach the knuckle.

The usual holes in the wind passing the knuckle made busy work for the short handed boats as they headed for the rainbow. Across to Clipera where the winds were still fickle at 6 to 7kt and interesting differences between speed through the water and speed over the ground; if you can trust your paddle log! 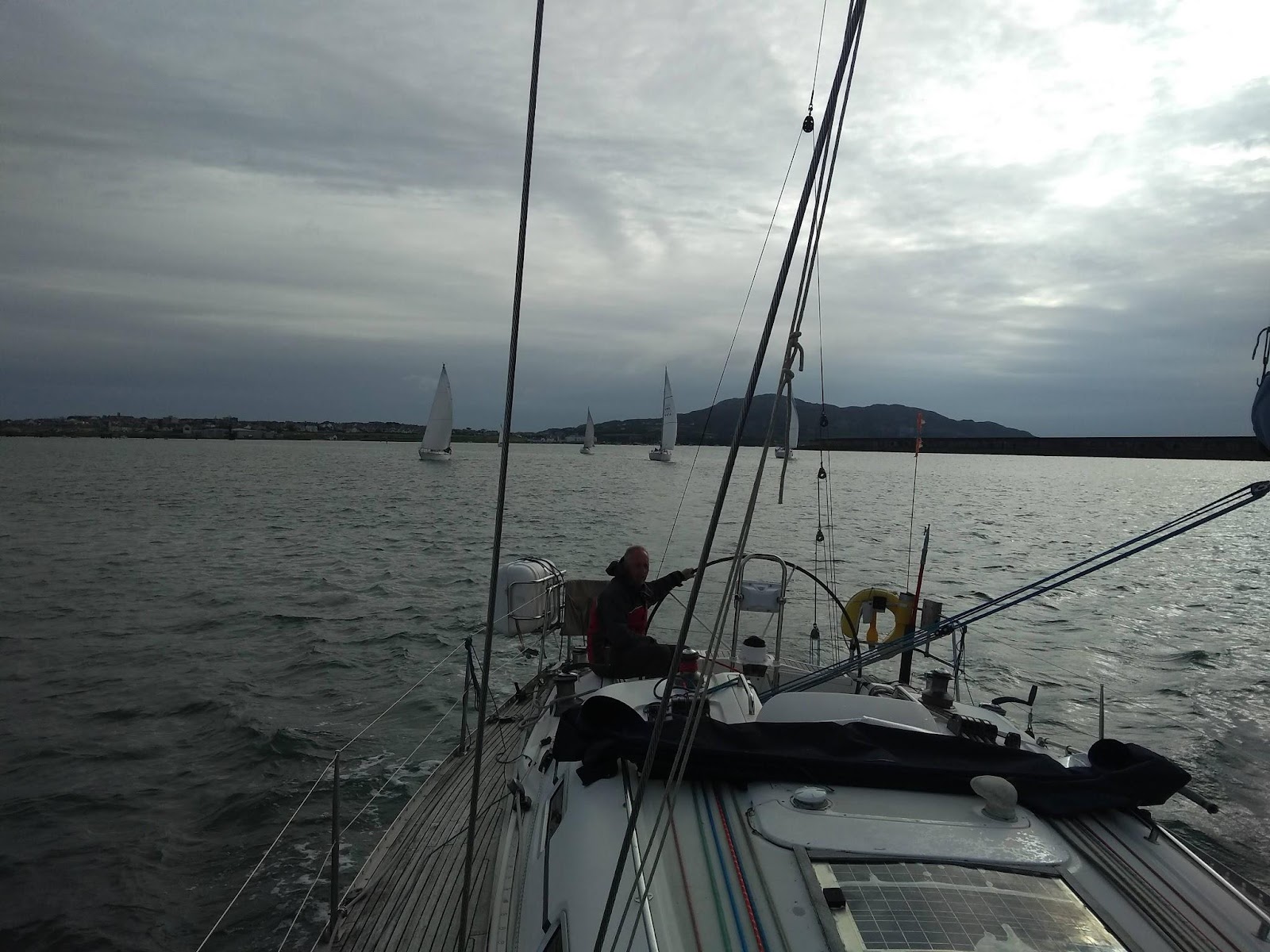 Looking back from Flair IV with Holyhead Mountain in the background with the weather set to change.

The downwind leg from Clipera to Bolivar gave opportunities for the crews to try different tactics with goose winging on port or starboard or going off the dead run depending on the tide and wind conditions.

By the time Flair IV rounded Bolivar the tide was beginning to ebb with a current running in a westerly direction building quickly, rounding the buoy a few minutes ahead she had a better heading down to Meath while the other yachts didn’t manage to point so well. Due to the slow progress between Clipera and Bolivar the race was shortened to Meath (p), Clipera (s) and finish; this was due to concerns over getting back to the moorings in good time to clear up and get the launch to shore before 21:00. However the wind increased to 10 - 12kt as we beat towards Meath increasing boat speeds from around 3kt to 7kt SOG. 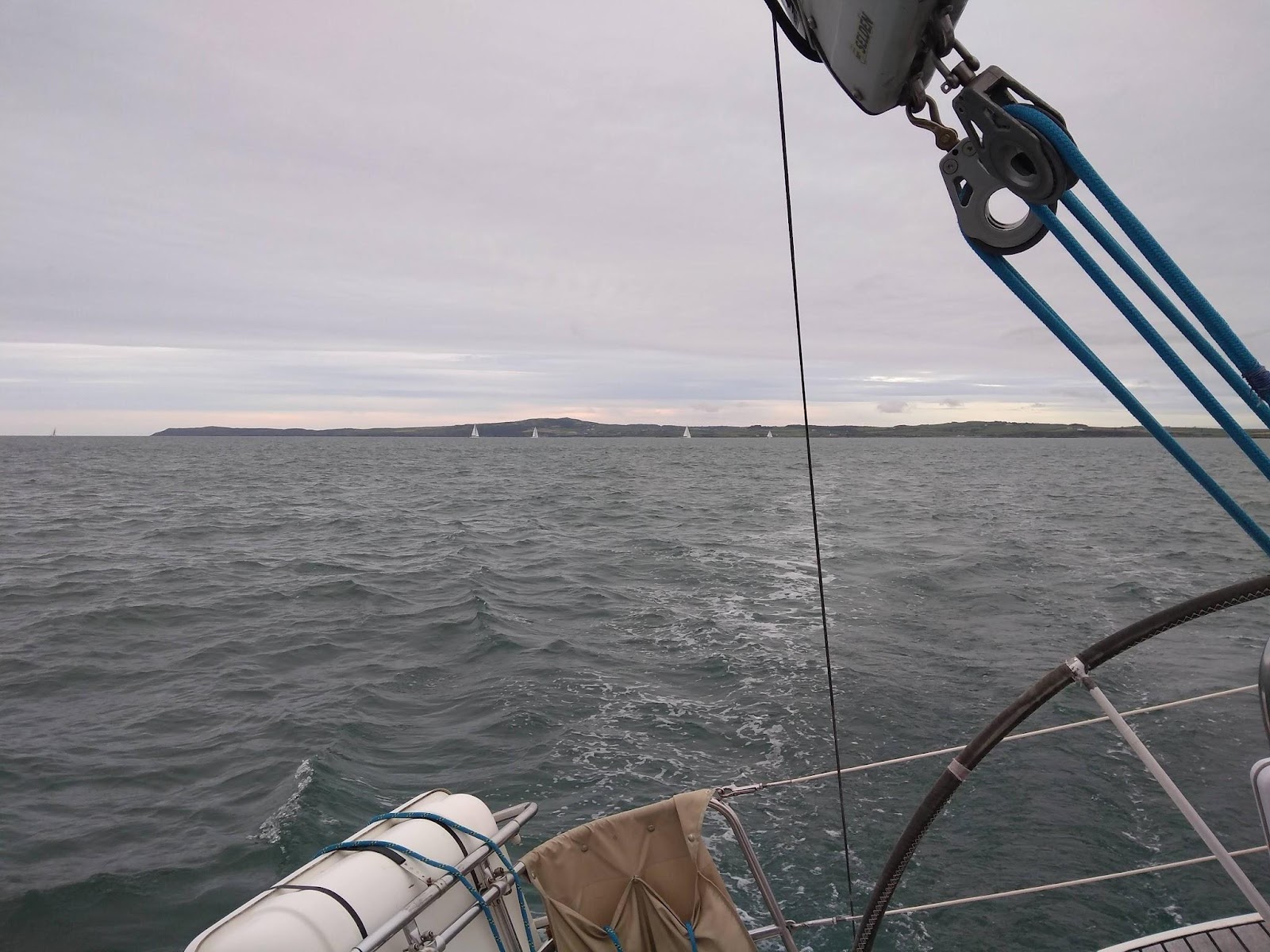 This was our view as we entered the harbour so the concerns over timings on the slower boats was still justified.

Hi Mark - good fun. I’ll never make a racing sailor - I get bored at the back but it’s all fine again when We turn round Without having to go round the mark -  ahead of everyone - briefly - and then get a second chance to see if we can keep ahead!

With the launch service starting at 17:00 we were hoping that the crews would have enough time to get safely onboard without too much trouble. The launch was running from the slipway as the tide was too low to use the groyne.

3 yachts prepared for the start and I checked with Port Control about the ferry schedule for the evening and posted an update on the WhatsApp group for racing. I selected course 12 from the website course card; which can be found on this link. This would give us a long downwind leg to Bolivar, then a beat back to Meath, a reach from Meath to Clipera and back with a beat beach into the harbour. 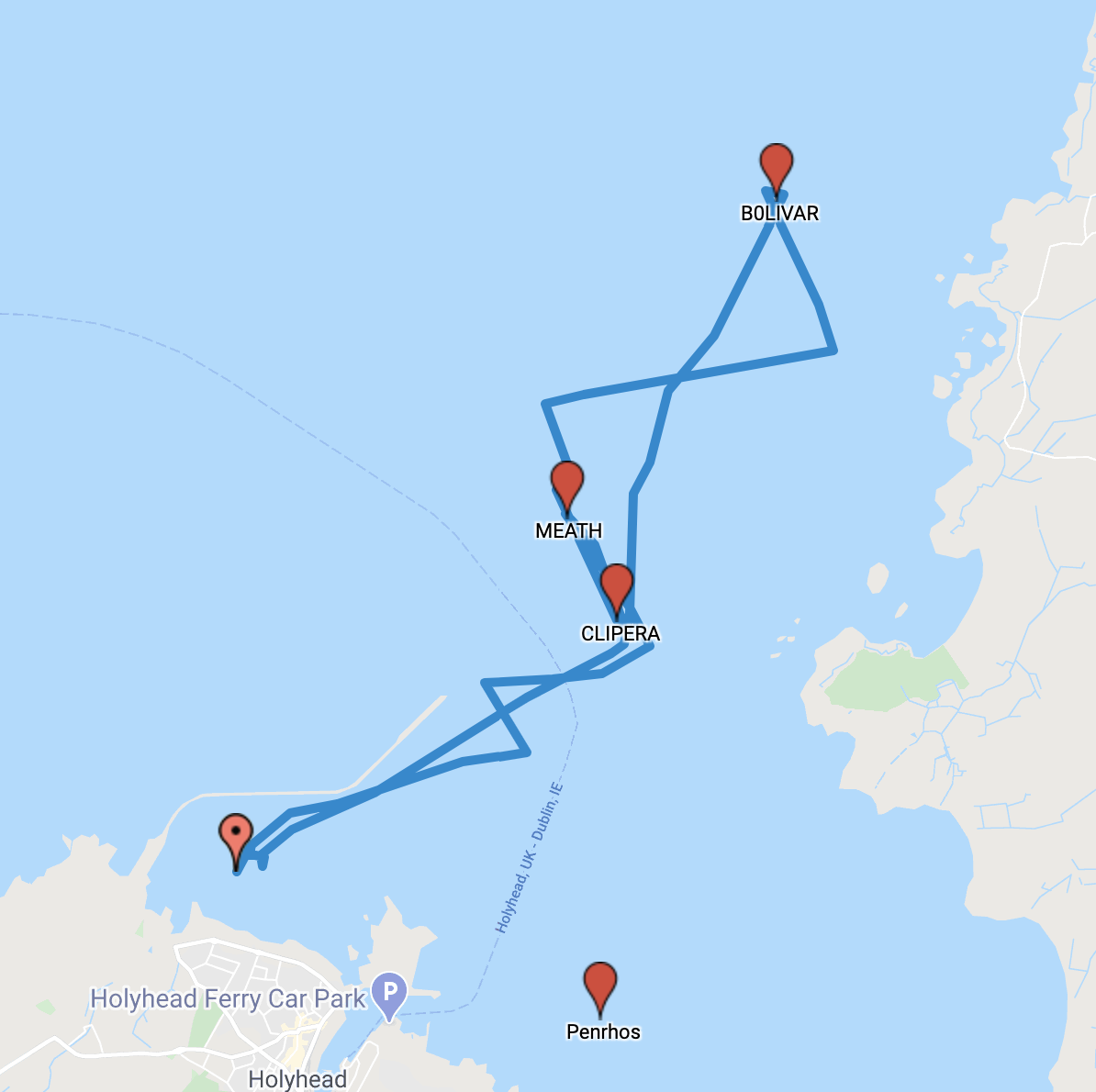 On Flair with the 20 - 25kt wind we decided to go with the main on the second reef but in making this decision we had not taken note that the reefing line was not yet in place! So as we started the race I was trying hard to get the signals over the radio while my crew were attempting to fix the reefing line through the sail and down to the boom. This was still going on after the start…. Thus we allowed both Pastime and Incantation to get away heading towards the first mark, Clipera.

Things got pretty close at Clipera with Pastime and Incantation going dead downwind while Flair gybed and headed off on port to try and take advantage of the early flood tide. Once round Bolivar Flair managed to get inside Incantation as they rounded the mark and she tacked shortly after Pastime as they headed down the coast. Flair was holding a better angle to the wind and had overtaken Pastime by the time they both tacked to head for Meath. The strong winds and short handed crewing was a little problematic and Incantation struggled to get away from Bolivar as the flood tide increased the resistance to their heading.

At Meath, with the mist becoming quite heavy rain, Flair had a considerable lead over Pastime and Incantation was almost not visible in the reduced visibility. Flair rounded Meath, then Clipera, then back to Meath but as she tacked back onto starboard to head down to Clipera her jib got caught on the spreader and split leaving the crew to furl the ripped sail and continue on the main alone. Once past Clipera she tacked to head for the entrance to the harbour but with only the main now in play she was making little progress against the wind and tide. Incantation called up to retire and fairly soon as they approached the harbour entrance Pastime overtook Flair. As the necessity of taking off sails before the launch service ended Flair was forced to retire and motor back to her mooring.

A great sail and congratulations to Phil for ‘weathering the storm’ to win the first race of 2020.

Following storm Francis it was great to get on board to check out the boats and go for a sail. The winds had dropped steadily during the day and we started in a 10kt south westerly. After consultation with the 4 yachts who had stated their intention to race the course chosen was again Course 12. [link to the course card].

Hellhound had asked that all the yachts should start at the same time this week so the start time was set to 18:30. However due to a slight issue over smoke from the engine compartment on Flair there was a 5 minute delay. Eventually the racers set off for the first mark Clipera with a welcome addition of Scintilla to the fleet. The starting system worked well although in the catchup from the smoke issue I was unable to make the normal over the radio countdowns.

Flair and Pastime got very close starts with Pastime getting a slight advantage on the line but Flair covering her to windward and soon climbing past to have a reasonable lead as they approached Clipera. 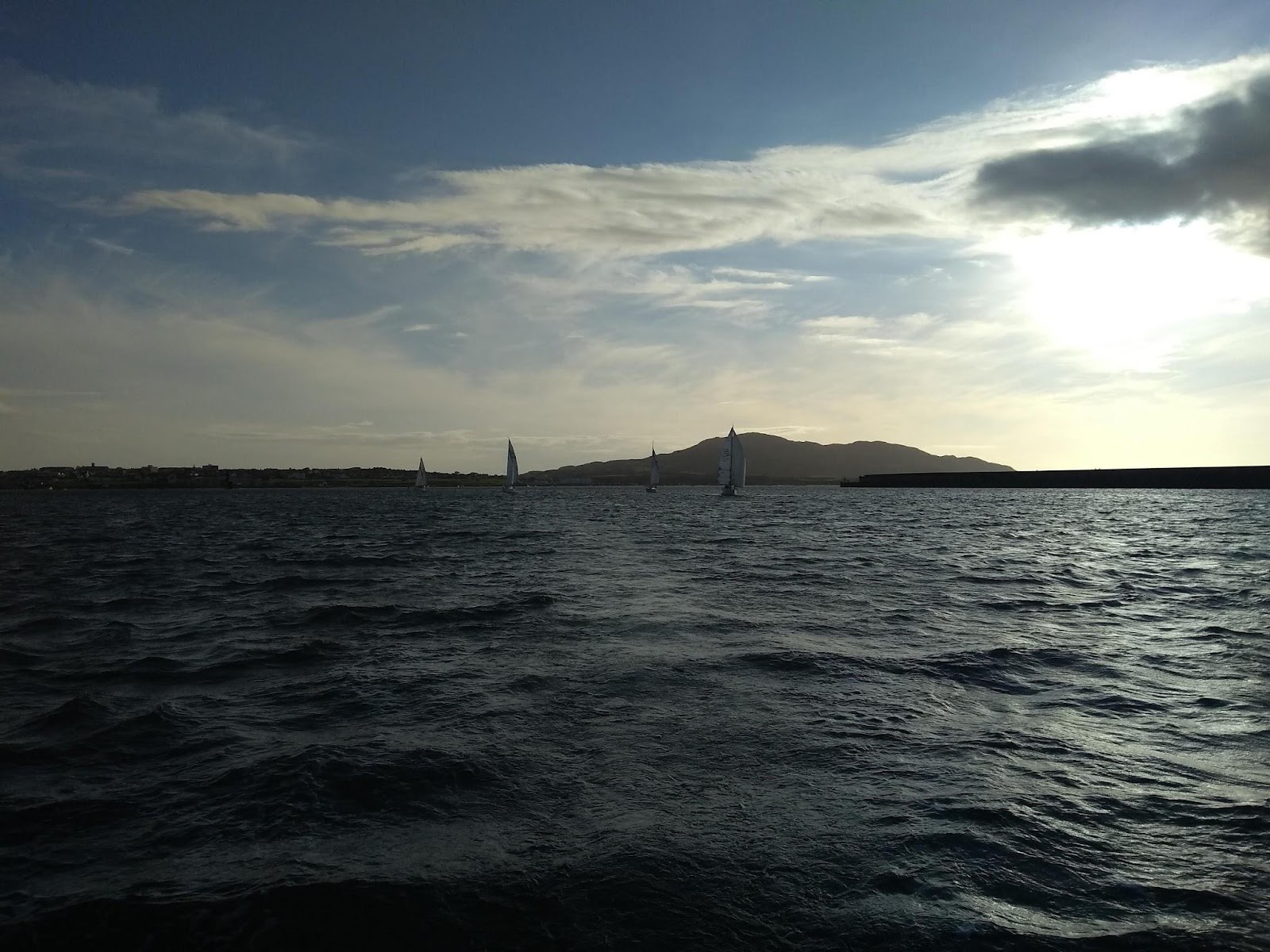