A beautiful day but not quite so good for sailing… The squib fleet had been out in the morning and some of the sailors moved swiftly onto the offshore fleet to take part in the race in some very fickle NW winds in the harbour.

There was so little wind at the start that navigation round the start line pin end was a little difficult but the 3 yachts got away with Rhumbull and Jetstream leading off with Flair struggling to get some way on as she tried out her lightweight spinnaker.

The course selected was Bolivar, Penrhos and finish and the start was delayed until 14:10 to avoid the two ferry departures at 13:50 and 14:10; however it took some time for the leading yacht to get anywhere near to the harbour entrance!

As they sailed across the bay out of the harbour there were patches where there was almost no wind and both Jetstream and Rhumbull pretty much stopped. Flair sailing from a long way behind Rhumbull and a little to leeward started to overhaul her but at they approached Bolivar and had to tack they were still behind by the time they rounded the mark. 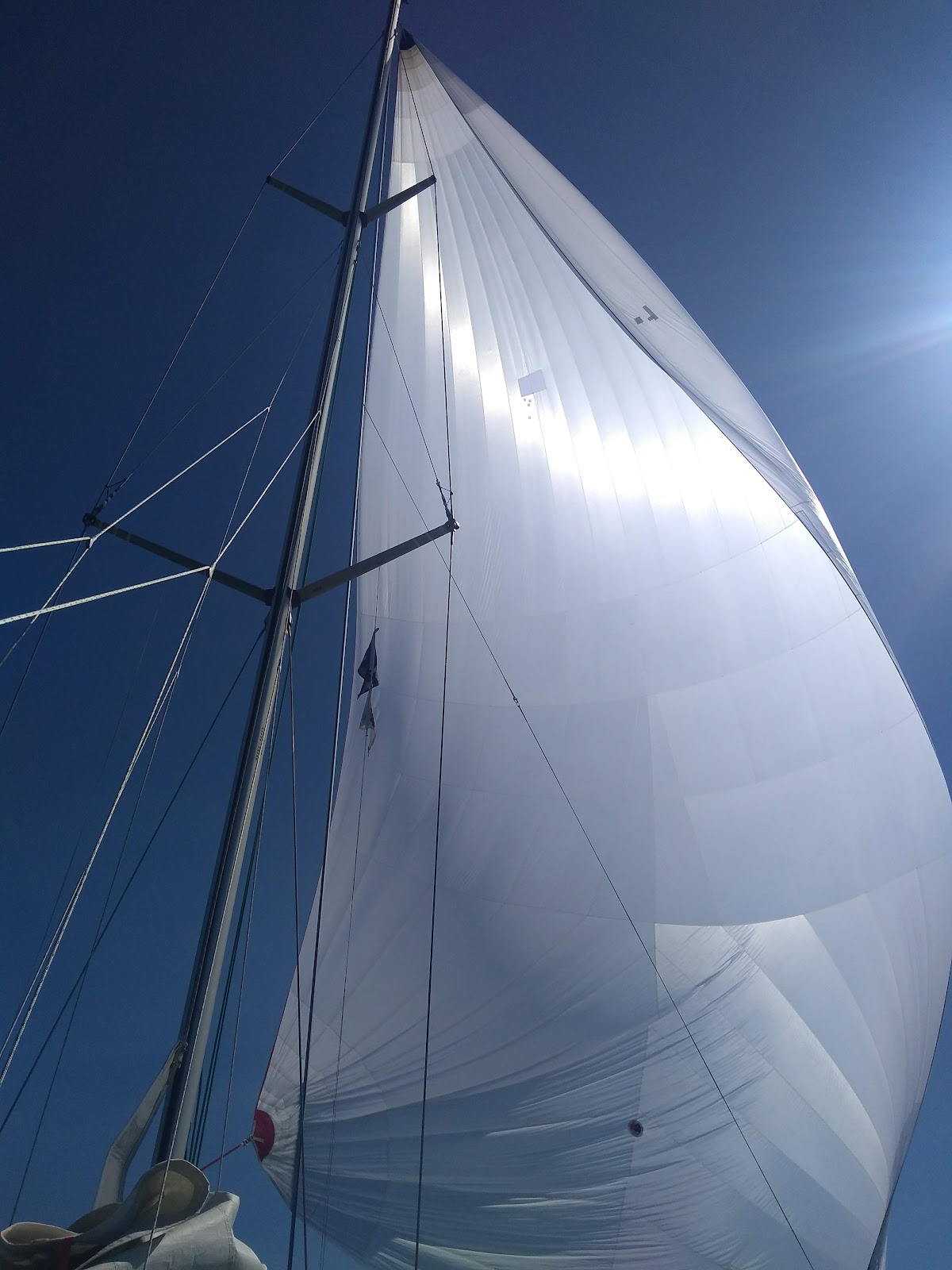 3rd Wednesday Evening Race for May 2018

With a more or less flat calm as the crews prepared the 5 yachts for the race start at 18:30 there was a call from the OOD Wendy asking what we considered as a sensible course. It was agreed that we should just attempt to go to Clipera and back! The 5 yachts were accompanied by 2 Squibs and as they circled waiting for the countdown there was just enough breeze to move forward although negotiating the other racers and the moored boats was a distinct challenge. The northerly wind was, as usual, pretty fickle as the fleet moved out towards the Aluminium Jetty; Jetstream and Rhumbull being the lead boats with newcomer Hydrology getting ahead of Flair IV. Jetstream had already got to Clipera by the time the third, fourth and fifth yachts had reached the open waters of Holyhead Bay!

Rhumbull also made good progress as the remainder of the fleet struggled against the tide in almost flat calm as they approached Clipera with Jetstream and Rhumbull well on their way back into the harbour! Carpe Diem who had been in 3rd place dropped to last place with the current taking them down towards Penrhos! Flair followed Hydrology and they were relatively close as Flair tried to change head sail 4 times between the code zero and her overlap genoa; by the finish line they were getting pretty slick at this maneuver just leaving the thick coat of weed on her hull as the remaining issue.

As usual the weather gave us a great if challenging sail. The fleet for Wednesday Evening Races is growing again…. Come on all you Holyhead Sailors get out and support the club racing!

The series results for the tandem series are now available on the links below. Yachts with current IRC Certificates are in the Fast Cruisers Class and their results are on the IRC handicapping system whereas the non IRC certificate holders are in the NHC Cruisers Class. As can be seen the winner of the May NHC and IRC Classes this year is Jetstream with 3 points in each class.

2nd Wednesday Evening Race for May 2018

Well that weather forecast "The second race of this season's Wednesday evening races starts as normal at 18:30. High Water is 18:41 BST and the weather is set to be NE 11kt going E 12kt later" simply didn't work out!

With a favourable Northerly wind Wendy, our OOD, set a course for Bolivar, Meath and finish. We welcomed Carpe Diem back to the racing fleet but as the 4 yachts prepared for the start the wind became very fickle with almost nothing to drive them over the start line.

During the last week we have seen the return of 3 more of our racing fleet; welcome back one and all! Following the losses on March 2nd 2018 we now have 3 new yachts contesting at the club: Rumbull, Phil Livingston’s yacht, Jetstream, Nigel Ingram’s yacht and Flair IV, Mark Rosenthal’s yacht all ready to race! We are planning hold our first Wednesday race of 2018 this coming week with a normal start time of 18:30.

If you intend to take part please let us know as soon as possible but remember to check out the latest HOLYHEAD LOCAL NOTICE TO MARINERS - currently the latest is 6/2018 which determines the areas we are advised against entering.

Last minute amendments are being made to our SI’s. These will be posted asap.

Our course card, mark coordinates can be found on this link: Course Card

Current Weather Forecasts and other useful information is available on this link; Useful Information

These have been reported to

[Thanks to Paul and Cath Bond for bringing this to our attention once again.]

This video was launched at the London Boat Show with a special mention in it of Holyhead and sailing round the top of the Island!

A quick reminder that the Isle Of Man Race is now less than 3 weeks away on SATURDAY  26 MAY 2018.

Get your entry forms in asap.

Entry Form and SIs on this link