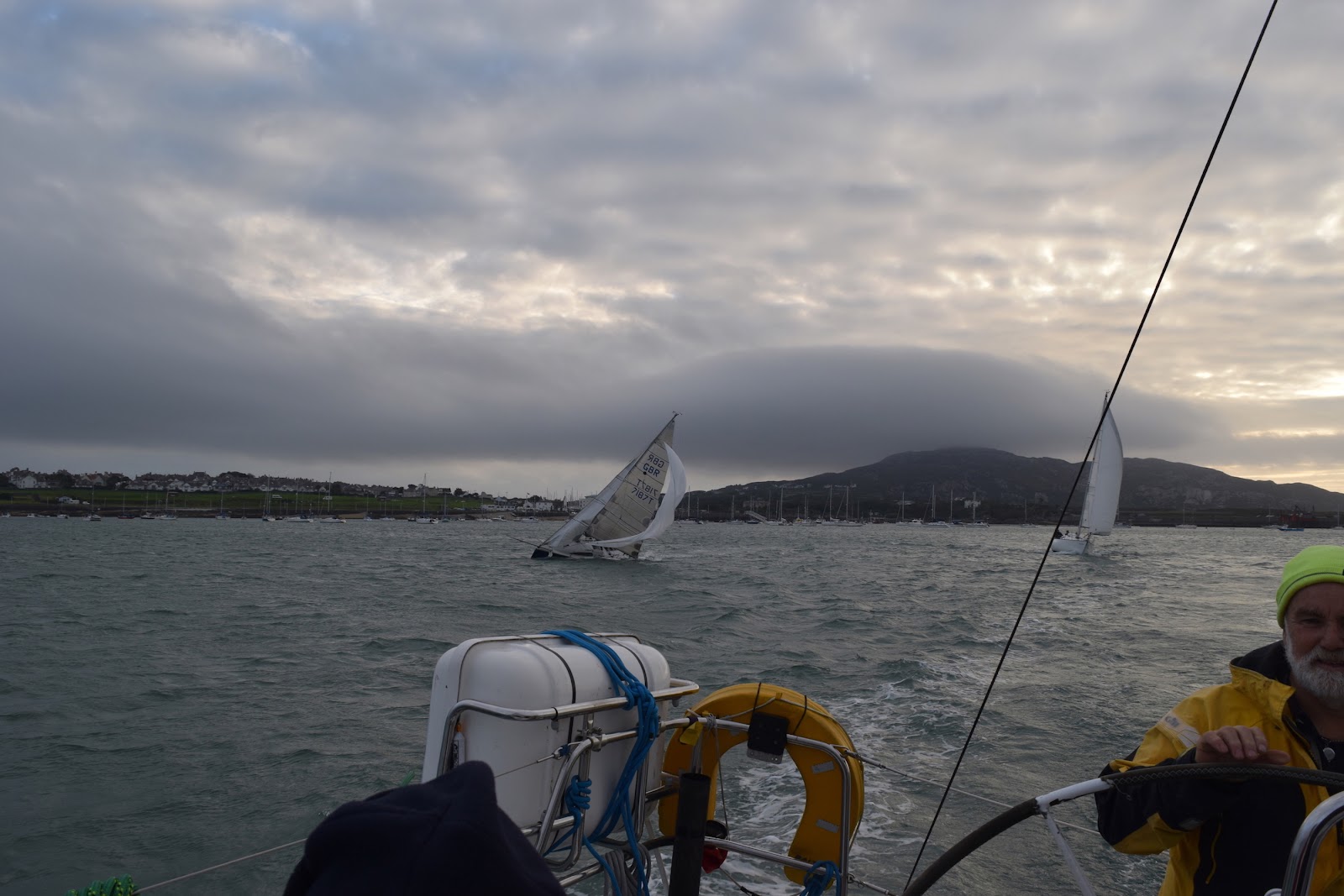 Flair, followed by Carpe Diem were out of the harbour before Rhumbull had got back in order and headed down towards Meath. Vision meanwhile was making good progress at the rear of the fleet.

As the wind was now on the starboard stern quarter Flair raised her spinnaker and managed a very clean dowsing as she reached Meath for the first time still ahead of Rhumbull but as they rounded the mark and headed on a beat towards Clipera, Flair and Carpe Diem gained their usual advantage over Rhumbull going upwind. Flair tacked a little too early not allowing enough leeway for the tide on the approach to the mark so had to tack twice more to round Clipera. Now she attempted to raise her spinnaker for the second time which she managed just about in time to drop it to round Meath, well not quite so she had to overshoot the mark a little before gybing to head back to Clipera and back into the harbour.

Over the water it was Flair, Rhumbull, Carpe Diem and Vision with Rhumbull dropping to 4th place on NHC Handicap. The difference on corrected times on the NHC handicap was only 5 minutes and 50 seconds. Overall the series for September 2018 Wednesday evenings goes to Flair IV.

Once again thanks to Wendy for being OOD and to Spinnakers for the post race food… Looking forward to next year’s Wednesday evening racing, but we still have a few more Sunday events to go…

For once a Wednesday evening with a reasonable forecast for SSW winds between 11kt to 19kt and sunshine! Six yachts turned out for the 2nd of our Wednesday evening races in September and all got away cleanly with Incantation and Carpe Diem on the wall side Flair and Rhumbull further south. Incantation appeared to be leading as they headed to the knuckle but soon Flair was ahead in better wind with Rhumbull closing in with her asymmetric set and Helen at the helm.

The OOD had warned of a shipping movement at 18:20 but the ship was actually the small cruise liner and it followed Rhumbull as she tacked downwind out into the bay Rhumbull had gone a long way south before tacking back to run just behind Flair as Flair headed dead downwind with her inexperienced foredeck crew struggling with setting the spinnaker. At Bolivar there was a rod fishing motorboat which started to move, seeing all the yachts bearing down on the mark, but Flair got into some difficulties as she attempted to gybe and as a consequence allowed Rhumbull to take the lead while she bore away towards Carmel Head in Phil’s words “to check out the seals at the skerries”. By the time she had unwrapped the spinnaker from the forestay she had dropped to last over the water and began the slow catch-up process back to Bolivar and then to overtake the group of the 3 yachts headed by Carpe Diem, with Vision and Hellhound at close quarters having rounded the first mark of the course. Rhumbull now had a substantial lead followed by Incantation as the yachts headed back upwind to Clipera. Flair passed Hellhound to leaward and then tacked between Hellhound and Vision making an earlier port tack than the rest of the fleet to avoid having to get into Vision’s bad wind.

Then to avoid the adverse tide flow Flair tacked back onto starboard after a short interval and comfortably passed the two yachts as they tacked away from the shallow area. Now Flair was chasing down Carpe Diem and managed to pass her on the leg as she sailed to a point by Meath before tacking again back onto starboard to head down to Penrhos.

Rhumbull was close to Penrhos as the OOD called to check on timings as the sunset was getting ever earlier and with the weather front approaching the light was fading quickly. David Peters decided that the course would be Penrhos and finish. Incantation taking a line well to the east of Penrhos had disappeared from Flair’s view as she sailed towards the fuel tanker at anchor and she tacked back onto port to get a better bearing on Penrhos. Incantation still had a significant lead over Flair as she rounded Penrhos with Carpe Diem doing well, as usual, on the windward legs. Vision was in 5th place with Hellhound trailing a little behind. As Flair rounded Penrhos, with only 0.5m below her keel Rhumbull was already at the harbour entrance and Incantation about one third of the way up this leg, but Flair determined to get back to second place over the water, achieved around 7.8kt on a beam reach to reel in Incantation. As the two yachts entered the harbour Incantation had gone further towards the breakwater but Flair had hardened up right at the end of the Aluminium Jetty gaining the advantage and setting a heading straight past the knuckle to the finish line. Rhumbull was back on her mooring by the time Flair and Incantation reached the finish with Carpe Diem and Vision following; Hellhound called in to retire as by now it was getting quite dark with some spectacular colours in the evening sky to the west.

Another fantastic sail… Thanks to all who took part and to David Peters for his duties as OOD.  I have included the IRC Handicap results for this series even though there have only been two yachts so far in this class just to show the real time differences.

The forecast increase in the wind was a little later than had been hoped and as the two fleets, Squibs and Offshores, prepared for the start the wind had dropped to less than 1kt; another “Windless Wednesday”! 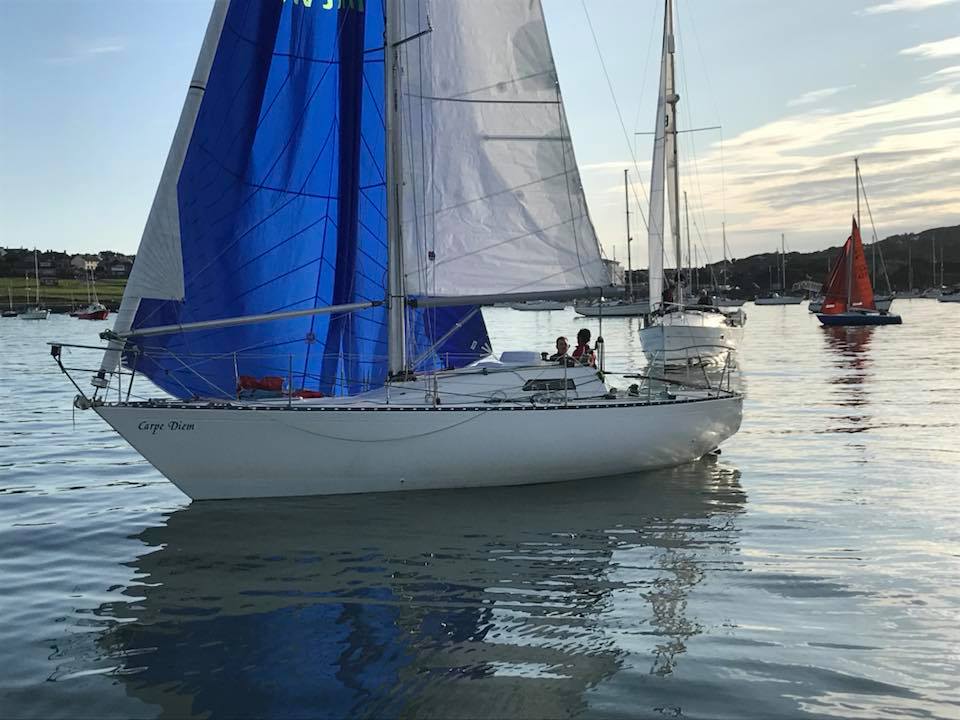 There was so little wind that the 5 minute gap between the Offshores start and the Squibs start did not allow the first fleet to get away leaving a chaotic situation at the start line. Flair had been waiting around to pick up a delayed crew member and she glided into the melé of boats at the IDM end of the line. Flair tacked away to starboard to avoid colliding with Hellhound and several squibs but as she backed her foresail to tack back to cross the start line she managed to glide up alongside Incantation.

The winds remained ridiculously light and variable with sails hanging limply from mastheads; but as Flair moved towards the knuckle with Vision and Incantation close behind she was gradually pulling away and moving towards some ripples on the water ahead. 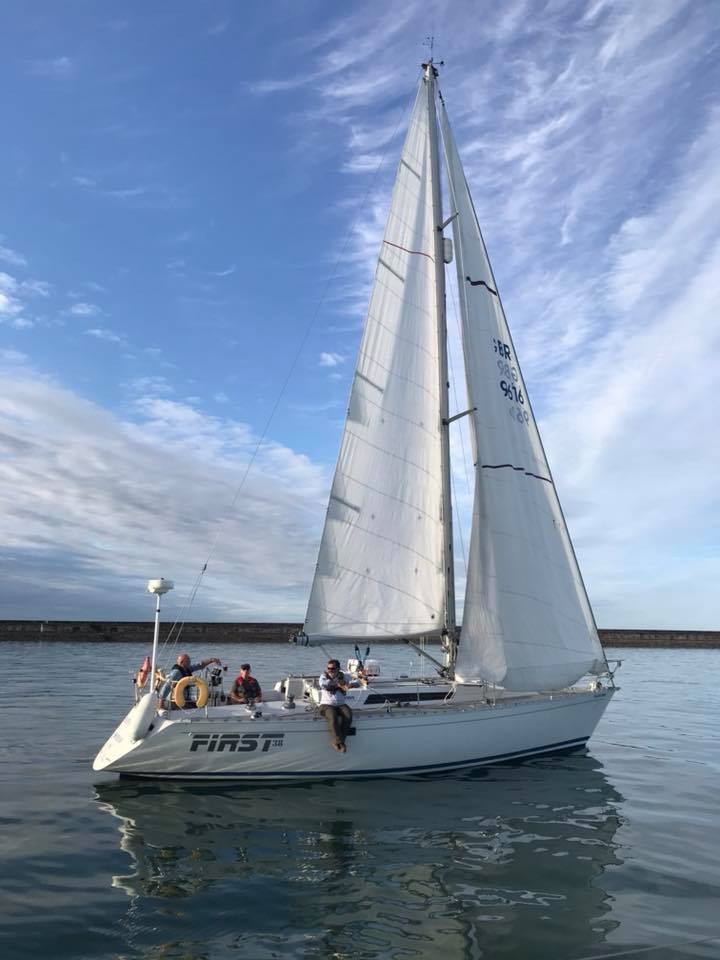 It was clear that a change was approaching with clouds of a weather front moving in from the south west and by the end of the breakwater the wind speed had increased to at around 4kt. 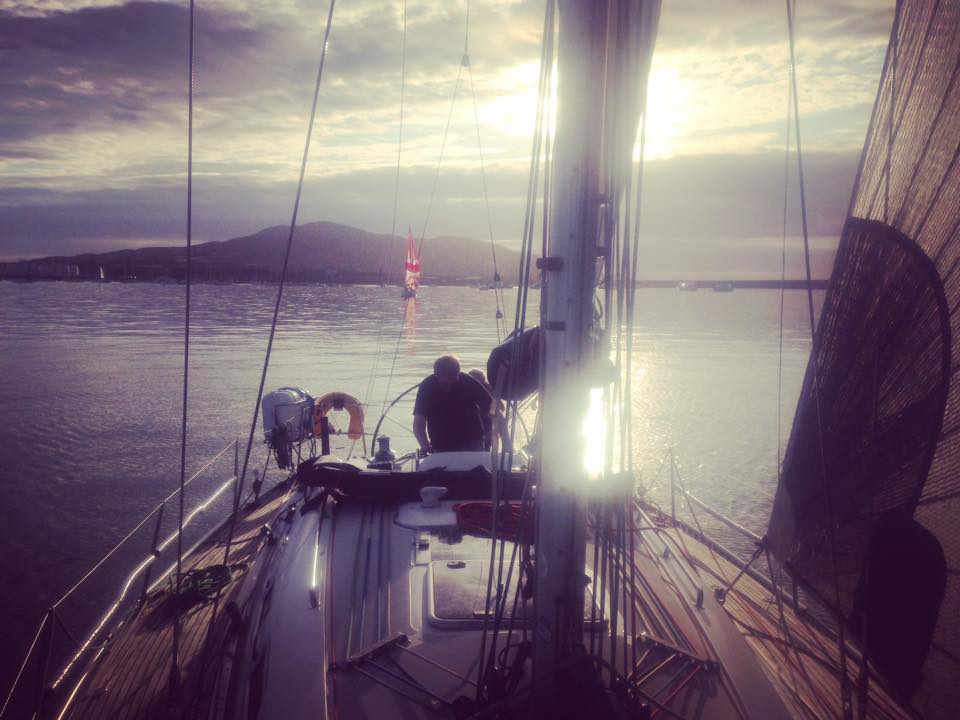 of the increased wind backing to the south and forged ahead towards Clipera.

Hellhound and Carpe Diem called in to retire as they were still way back in the harbour leaving Incantation, Vision and Flair to continue in the race. Flair was now sailing in a steady southerly wind of around 8kt to 10kt and she rounded Clipera with a significant lead, Vision who had made good progress was now slightly ahead of Incantation although as Incantation hit the increased wind she was beginning to reel in Vision on their way to Clipera.

The three racing yachts all agreed that it was a wonderful way to spend a Wednesday evening with a great sail back into the harbour. In the rush to get the results out I had forgotten to carry forward the NHC handicaps from the August series. These have now been updated and the results now show that Vision came second rather than 3rd, well done Chris and crew!