First thing that has to be said is:

An excellent job by the race team of OOD Richard Date, Mark layer extraordinaire Dave Meacher who even brought his own rib, mark and camera hence the quality pics. A special thank you to Pat Guests sister Angie and husband Don for coming all the way from America to help.

3 races back to back committee boat start Olympic courses. Perfect sailing condition it had to be Holymed. 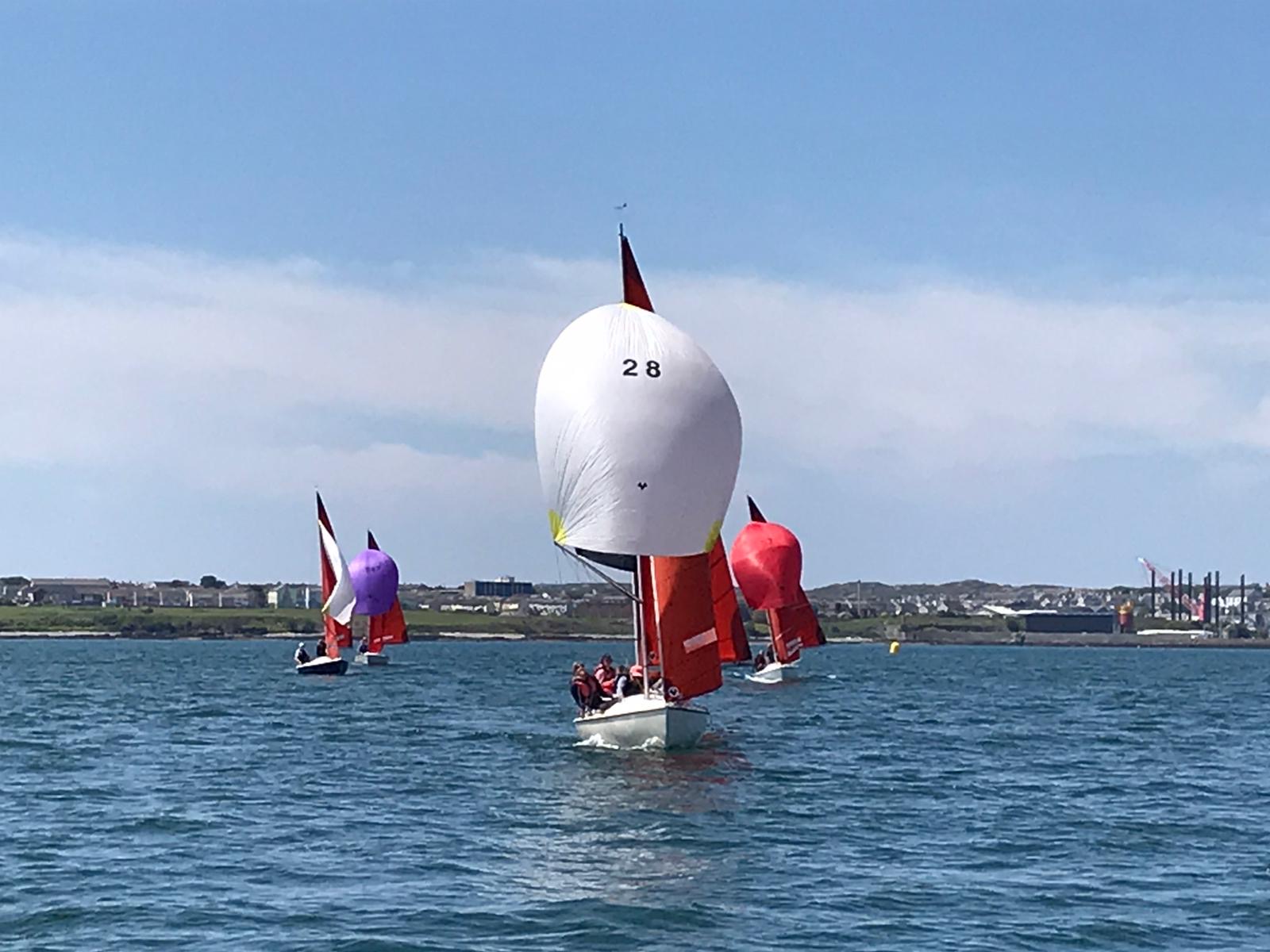 Ricardo and Judy take the lead the advantage of sailing a laser over the winter. Take a good look at the Black spin of Capt Gareth and favourite daughter Sian as it's been binned for a nice new pink, sorry lilac, one. Don't tell the wife.

The silver fox Ricardo and Judy are winners of the May Bank Holiday Gold cup at Holymed with 3 bullets from 3 races. 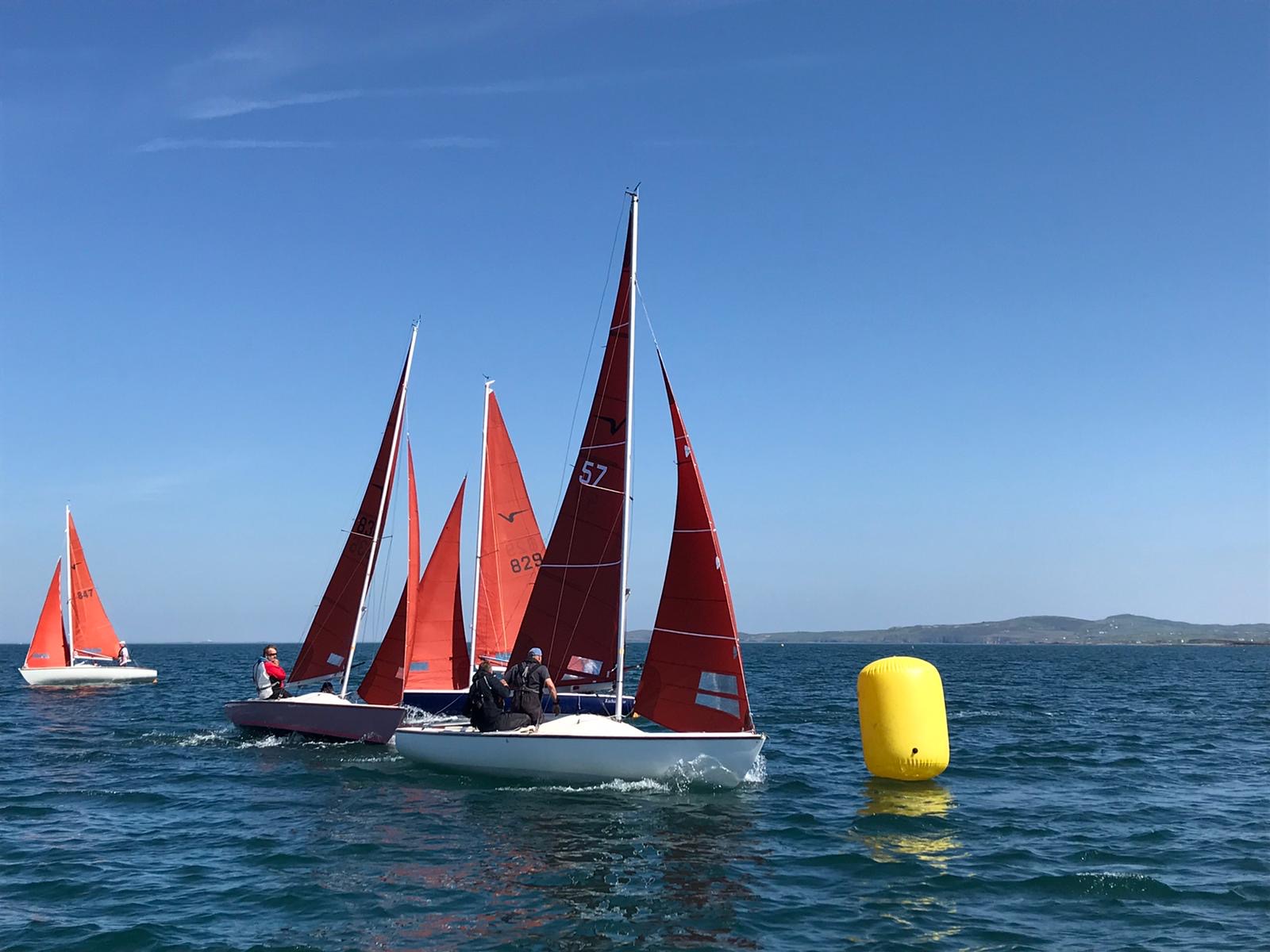 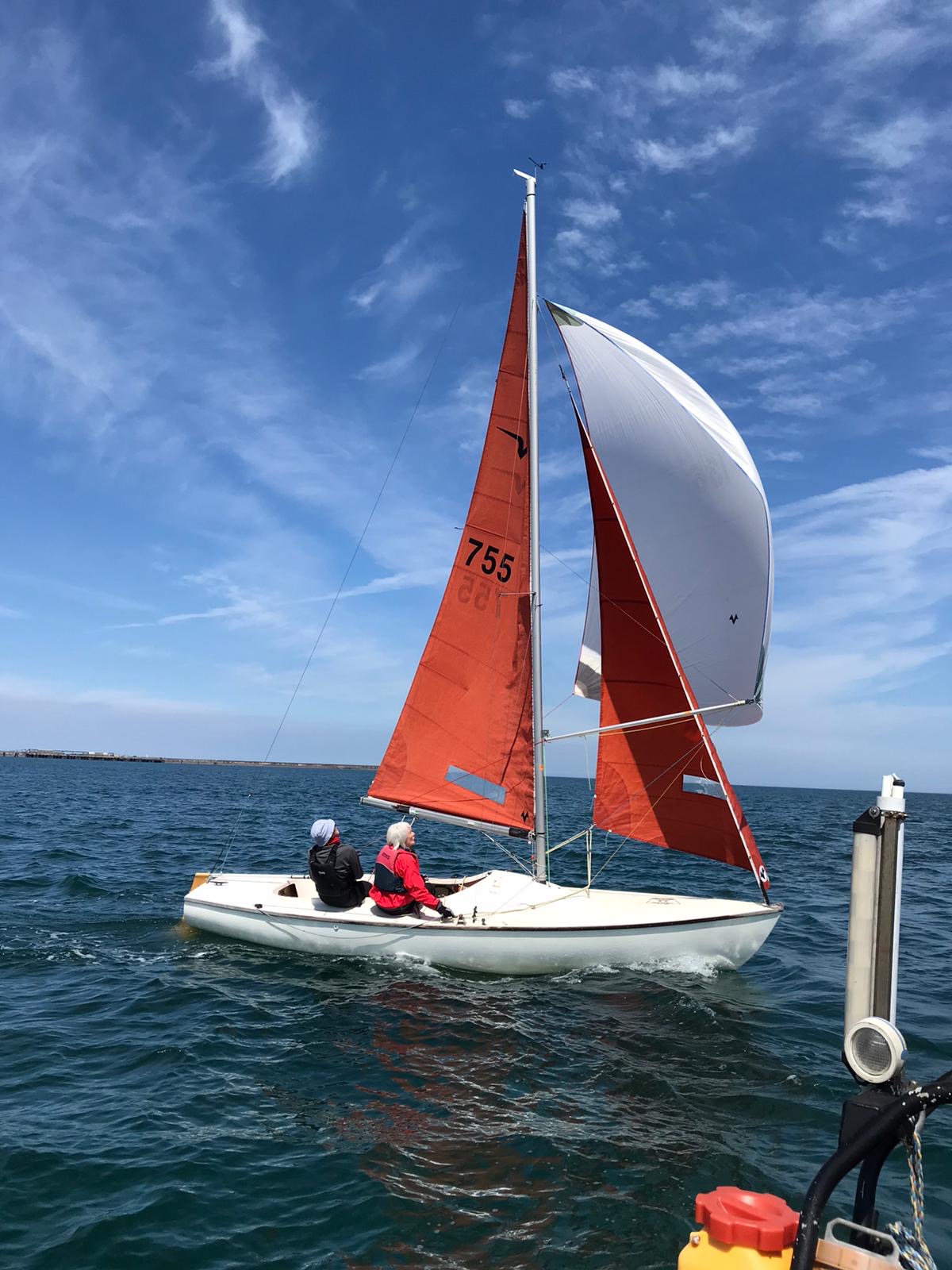 Dave Hall and Dave B were very lucky as OOD Richard Date took pity on them as late risers and delayed the start. Don't mention the ferry. 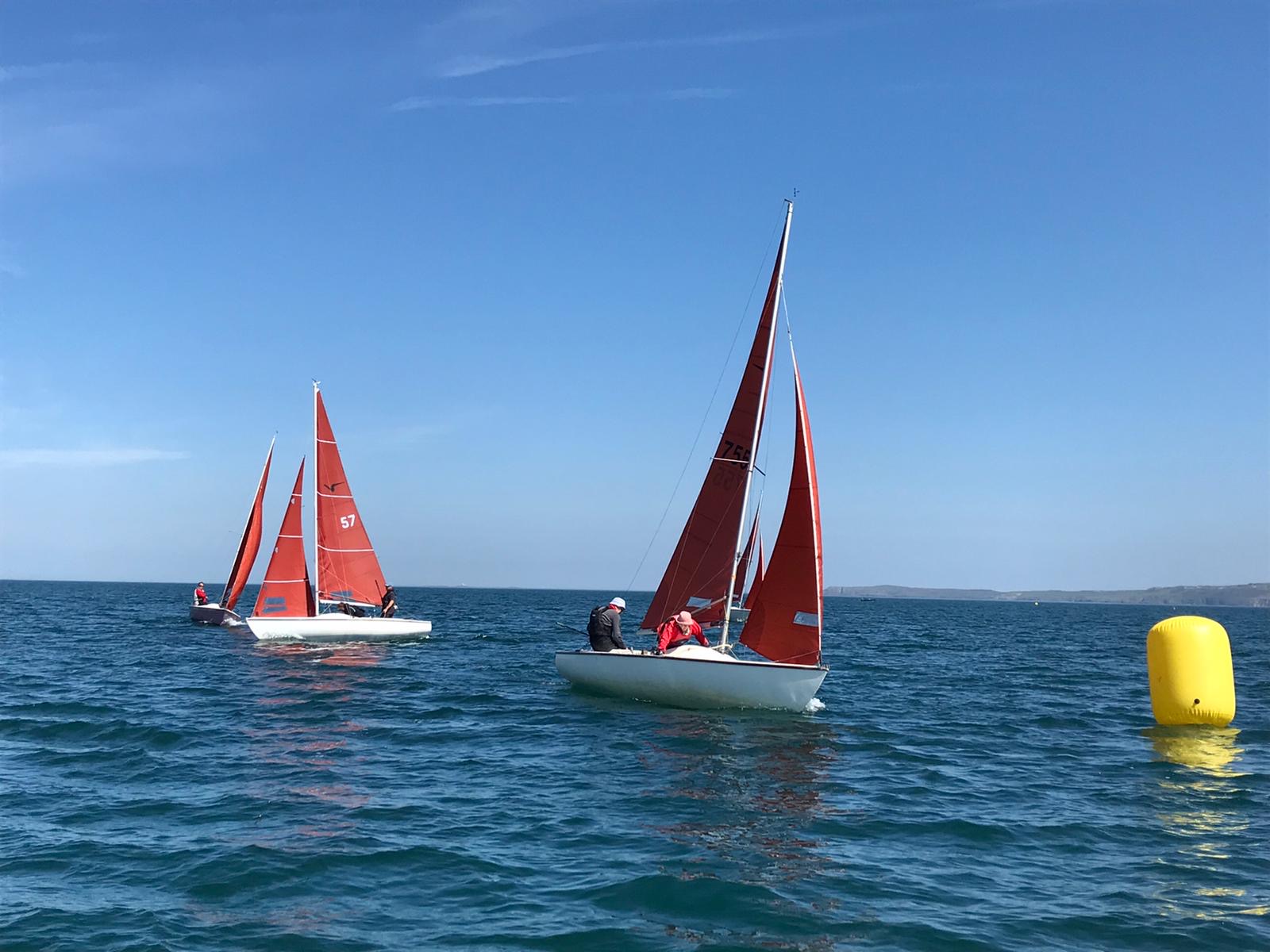 Cragie helming and crewing as it only Mike C 's 2nd time in a squib very smart looking brand new sails but slow. 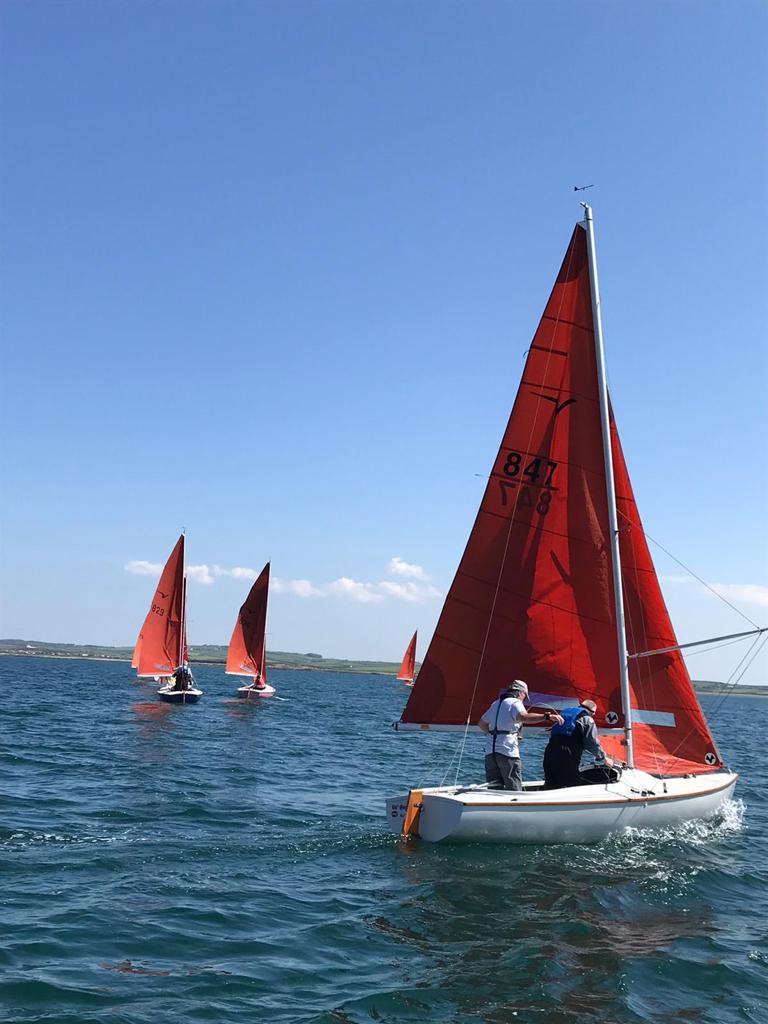 Tudor and Ieuan not looking where they were going

Come and join up all welcome .

Report by Cogger with small modifications by Mark

The first action of the evening was Craigie forgetting his New Jib and having to rush home in his hire car (Tors Volvo poorly) to get it. This seems to be a weekly occurrence as Capt Tudur Roberts tried to start race last week with two mains on board. Craigie managed to get back quicker than Tudur and race was started on time.

First to the race course for the second week in a row was Sundancer crewed by George and George.

Mark on yacht Lilly who was preparing for the Pwllheli Dublin race on Saturday kindly video’d the start.

There was a bit of normal Holymed banter on the run to the knuckle in the breakwater.

It went on about the weight of paint used on Con Brio crewed by Bill and Roger how they  achieve the quality finish,Pint of water is pound and a quarter but they did win the pretties boat on the water award it sparkled in the sun light. With the tide coming in Granit with Jas and Steve on board went out to catch it, Unfortunately they didn't gain anything and slipped down the fleet.

In the lead at the first buoy, Clippera, was the Cracker team of Tim and Dave, second Patriot crewed by Pat and Cogger then Bobonski crewed by new blood and youth on his side Harri and  Cragie.

The long beat was back to IDM (inner distance mark) the fleet split on which way to go with Cracker and Patriot going to Tinto jetty with the others tacking up the breakwater for the tide.

First to the windward mark was Patriot with Pat working his sock off. Closely followed by Cracker.

This was spotted by Alkypops whose crew were sitting in the bar having a pint. Gareth and Steve even used binoculars to try and work out what was going on. Should have gone to spec savers!

The antics on the run between Cracker and Patriot enabled Kachina Too crewed by rockstar Richard Date and international judge (sailing) David Battye to catch up Pat who was gutted to get rolled a  hundred yards from the downwind leg to the breakwater mark.

Cracker covered Bobonski up the beat to the finish with Kachina Too just getting through to leeward and lee bowing Patriot into 3rd by 2 feet.

Facebook was buzzing with the report of the silver fox returning to the fleet after his Kestrel campaign at their national.
Silver fox is Riccardo Roberts the most competitive person you will ever meet.
With Craig taking radio calls re the course from numerous boats all having an idea or the perfect one it was decided to have windward mark to leeward mark all marks to port only for the wind to shift 45 degrees minutes before the start.
Plan B was pathfinder

Apparently according to Cogger's scant report "new boy Will wins by miles". Click on the image below for the current series results.

A quick report from Cogger, The Pritchard family showed the fleet how to do it. Gareth and Anwen showed the rest of the fleet a clean pair of heels last Sunday morning to win.