A beautiful morning but still a bit breezy from the NE with the expectation of a choppy ride on the Club Launch out to the moorings. Shortages of crew meant that we were reduced to 3 yachts not the expected 4 with Chris Higham electing to support Liz and Alan on Soulmate. With Colin’s skillful helming I was onboard without too much splash from the oncoming waves.

Our intention was to cruise to The Brickworks however my crew was significantly delayed and the weather remained a little challenging for this. Once onboard Flair doing the odd job or two I advised Soulmate and Summer Wine of our delay. When the crew arrived we had a bit of a game getting my crew of somewhat advanced years over the toe rail onto Flair. With everyone safely onboard we came off the mooring and hoisted the main to the first reef and headed out of the harbour. By now both Ferries had docked and our path was clear to head straight up to Carmel Head. On a bit of a fetch in these NE 18 gusting 25kt winds we made rapid progress as indeed we needed due to our delayed start. By now AIS was showing me that Soulmate was already past West Mouse as we started to see the tide turn before we even got to Carmel Head.

The struggle to sail against the tide was a perfect example of how you need to get the timings of your sailing right. As can be seen from the track from Flair (forgot to start it at the beginning of the trip) the tack angles are not good!

Once we were almost in line of sight with Soulmate we heard them on the radio advising that they had shortened the intended cruise to shelter in Cemaes bay after the rigours of the morning. That sounded like a very good idea to us but even so it took us ages to battle the tide to get to a point where we could actually make passage into the bay. Just as we were arriving Soulmate called to say they were about to leave! Summer Wine was still at anchor and advised of her locations current overall depth; on this advice we rounded up and anchored alongside the 8kt Speed limit buoy only to be pestered by REALLY annoying jetskis using us a a rounding mark. They clearly ignore any reasonable behaviour and certainly don’t take notice of 8kt speed limits!

Trying our best to ignore these disturbances we had our lunch in the shelter of the bay while Summer Wine set off for our home port. After a leisurely but rather late lunch break we cleaned up got the crew prepared for the next phase of the journey with my expectations being a quick passage with mostly flat water sailing now the tide had had a chance to quieten the seas.

With the anchor lifted we raised our main and unfurled the genoa in slightly lighter winds and headed on a broad reach out of the bay and altering course to sail near to the Harry Furlong buoy.

The sea proved to be perfect for this return trip and we were able to run goose winged without too much rolling around. 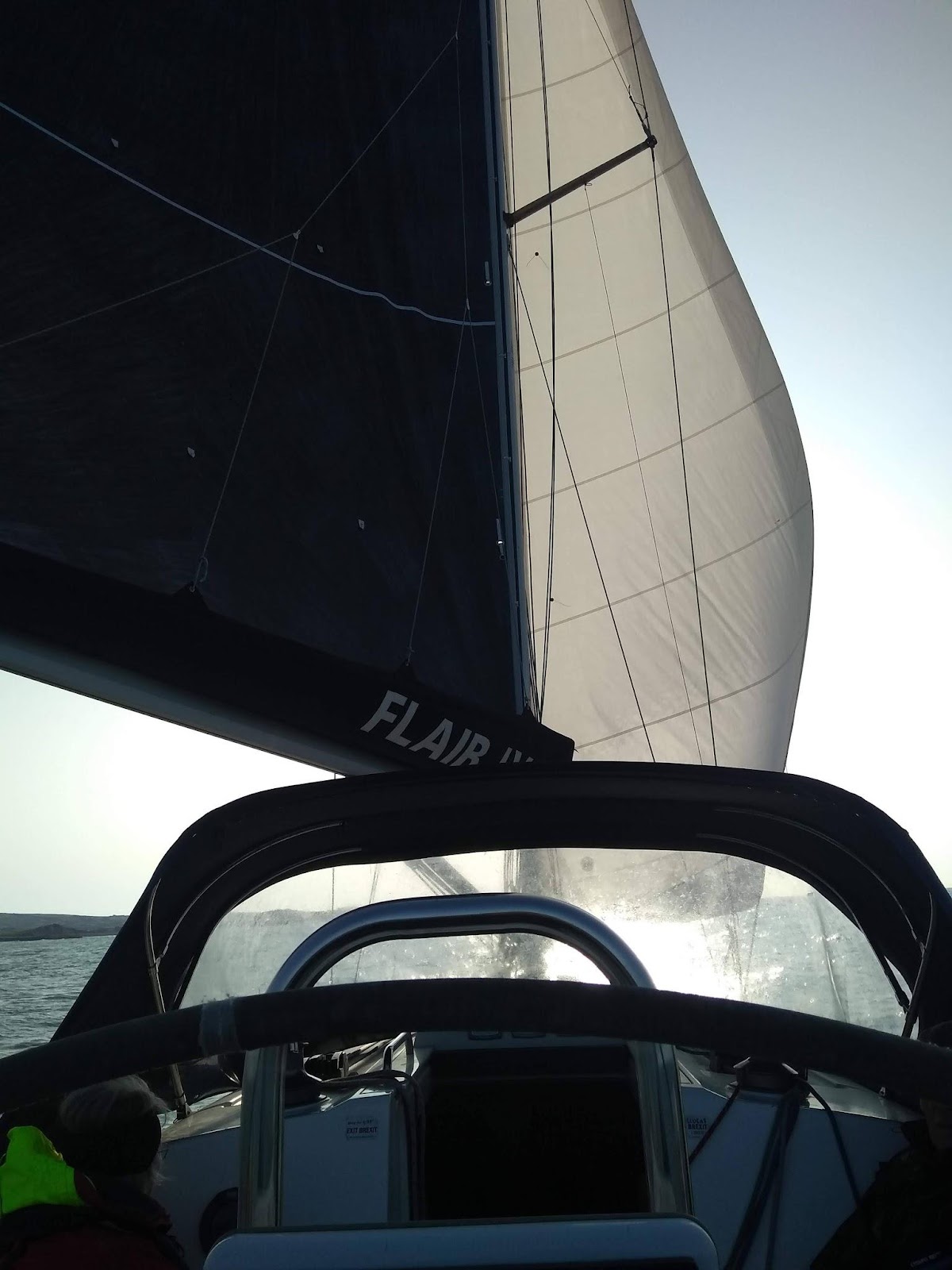 Once through between Carmel Head and the Skerries we gybed to lay the harbour entrance running at between 8 and 10kt in apparent winds of around 8kt. My crew had had an epic 2 stage sail, one bumpy section in good strong winds with plenty of heal angle and then flat seas and downwind level sailing. What could have been better! They certainly enjoyed the day with Luke’s dad admitting that he was, at 83, probably the “oldest crew member to have sailed on FlairIV”. 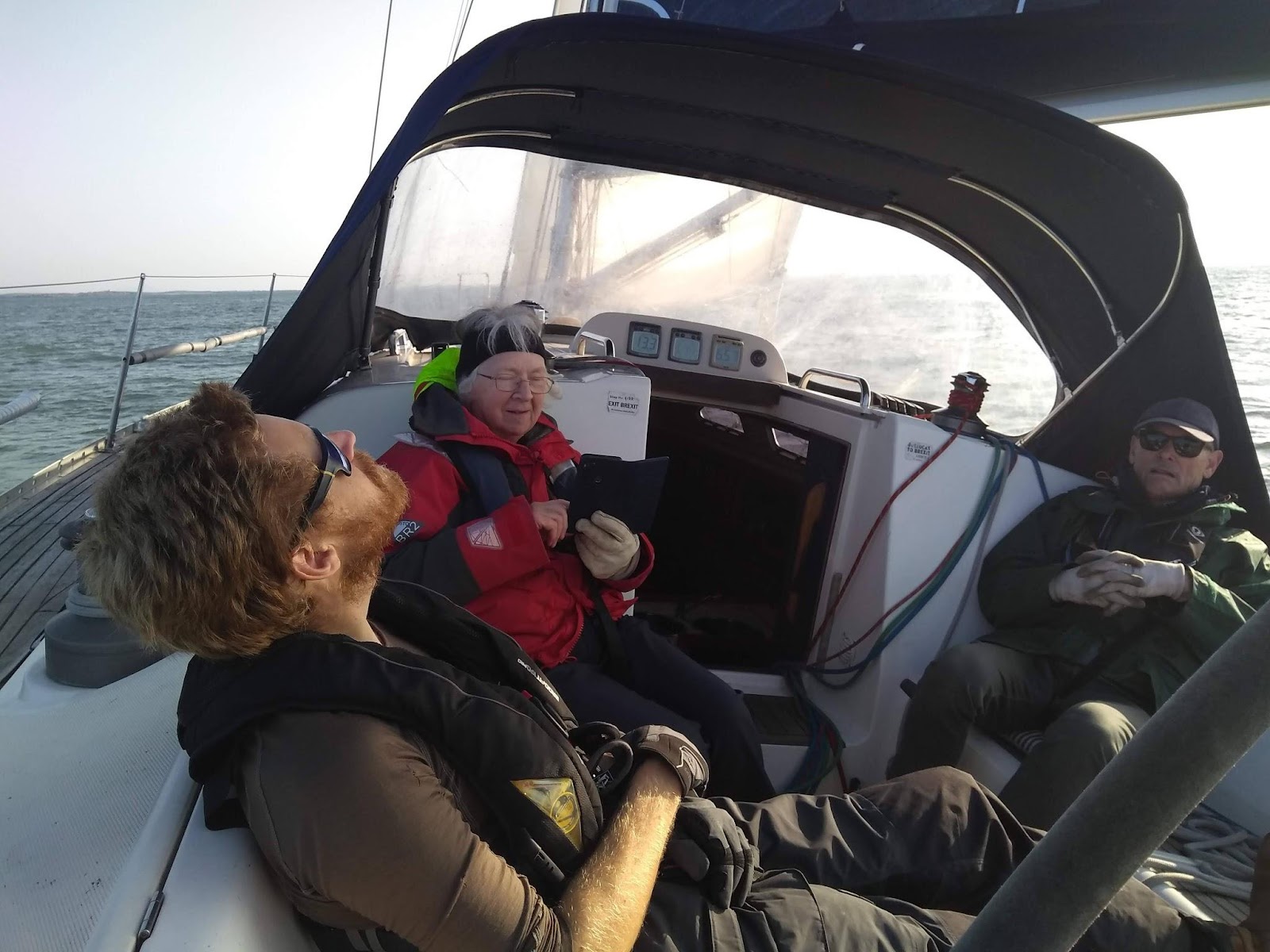 As we approached the harbour we could see Stena Estrid coming in past the Stacks and after communicating with her radio officer we carried on into the harbour. Back on our mooring in good time we packed up and got our crew safely onto the launch in nice placid conditions.

What a great sail again today. As a final item Luke did a mast climb to the spreaders to recover the starboard flag halyard which has stopped us from flying our club burgee. Now ready for our next Wednesday Race.

Hope to see a good turn out on the 2nd to last Wednesday evening race of 2020.