We had joined a small flotilla of Holyhead Sailing Club boats for the day.  It was an ideal trip for a short sail, up to the Skerries and back with an intention of popping into the off-lying islets, The Skerries' and their tiny haven, the 'lagoon', but only if all the boxes were ticked.

After dropping the mooring line we found we were the first to leave, so we motor-sailed eastward to exit the 'new' harbour. After scanning the top of the breakwater for ships all appeared clear, but checked in as we customarily do by radio with Port Control. For the first time in my life I was asked by them to contact an incoming ferry, 'Ulysses' on VHF14 for advice on whether to proceed, or not. Apparently Port Control is forbidden to offer such advice when ferry traffic is nearby....it makes sense in a way, strange that it is. In contrast, down in Dover, we'd have been escorted to avoid ferry traffic by the port's very own patrol vessel.....how things vary with local custom. I tried to imagine myself calling up a French ferry for advice as we were about to leave Calais! "Bonjour monsieur......

Leaving this little drama behind, a speedy 6.9kt sail ensued with the tide in settling waters to windward. A semi-rolled genoa to slow us and reduce heel a bit, we weren't racing and we were still a little early to catch slack water at the Skerries. 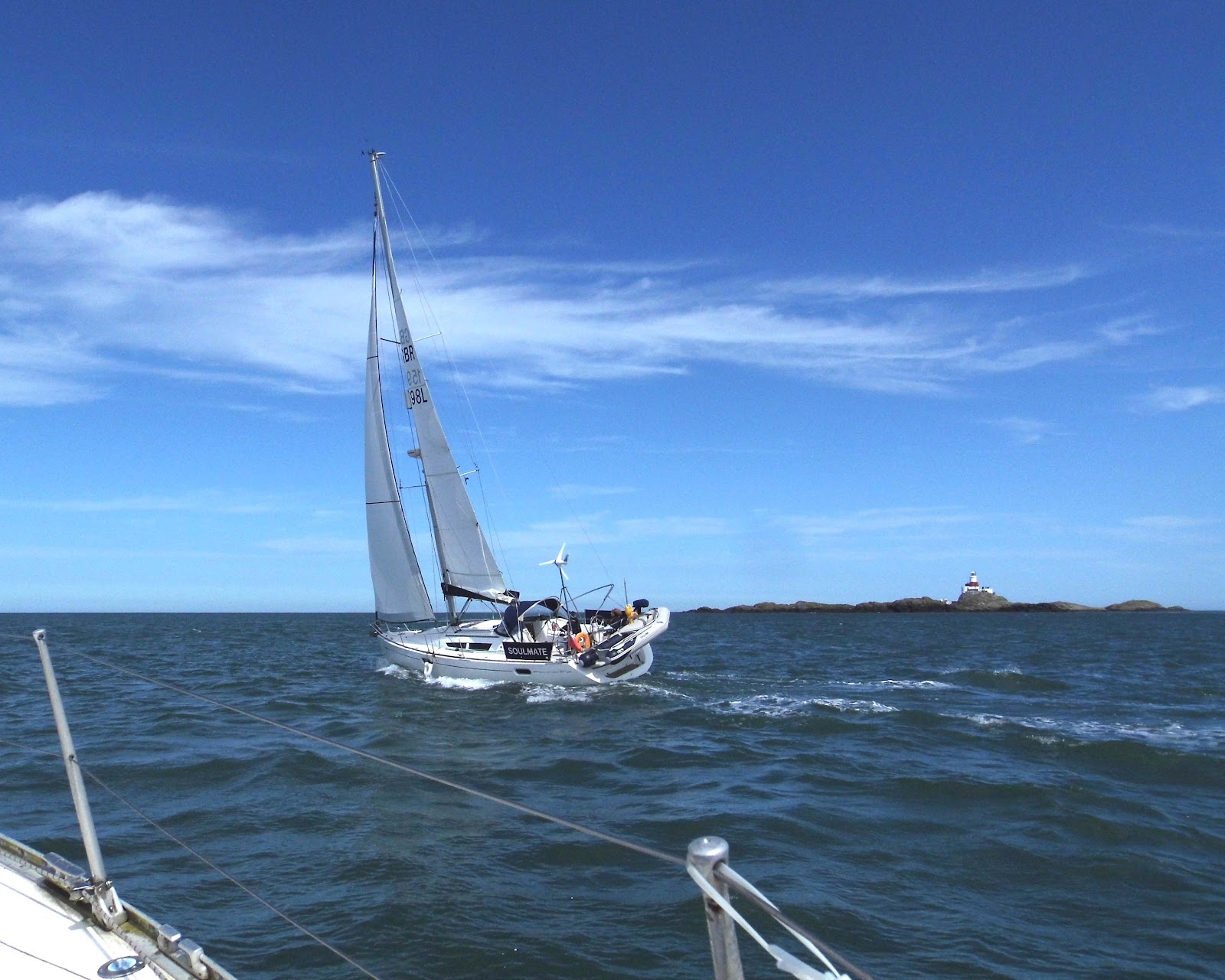 Soulmate from Lionheart on the way to The Skerries

Soulmate from Flair IV looking back to Holyhead

When we reached the rugged islands Mark, on Flair IV, had also spotted that the tiny haven's entrance which was already occupied by a visiting craft, the RNLI inshore lifeboat was also spotted between the rocks presumably on exercise. All too busy for comfort and the tide's fast flooding waters crossing our track. By this time the club-boats had set sights on Cameas Bay for lunch which lies a few miles along the coast. Unfortunately I'd promised my wife that we'd be back home shortly after 4pm...so we parted company and headed south.

It had been a brilliant day, so much to learn and experience. Alas, entry into Skerry Lagoon awaits another day.

As Tim has stated above, with the lagoon busy, the first to arrive close to the island Flair called up the fleet to agree on an alternative destination. As they the tide was still running quite strongly NE and being on the North of the island three of the yachts returned the calls and it was agreed to carry on to Cemaes where we would get shelter on the eastern side of the bay. VHF contact with Hellhound was problematic; attempts to contact him by Flair4 and Lionheart failed. and spent an hour waiting for us in the lagoon. I had noticed the significant difference between the onboard VHF with its masthead aerial and my handheld so it was assumed that Hellhound had gone into the lagoon and her VHF signal was shielded by the rocks, Lionheart when approaching Church Bay tried to contact both to act as relay but neither replied. Lionheart did hear Holyhead trying to call Flair IV later but again with no reply.

It is evident that there are issues with VHF signal between yachts when working in areas between rock formations like cliffs and remote islands. With his involvement in the NCI Tim suggests that we have a discussion to help us to ‘stay in touch’ on these cruises.

As an aside the Coastguards both sides of the Irish Sea were very busy with calls including an Elderly fellow who fell on the beach fell  in Borthwen fracturing his pelvis. The Helicopter, police, ambulance, NCI, (duty and off-duty), all involved but with the problems here on Anglesey of parking during this new rush for beautyspots  there were cars parked illegally blocking access. It is also a difficult route to the chopper's landing site; eventually the Ambulance took the casualty to hospital.