With the long wait for the 5 mile rule to be abandoned and, following the advice from the RYA Cymru Wales on the Welsh Government’s Regulations with regard to boating, I suggested to a few boaty people via the Club Facebook page  that we should go for a cruise to Porth Wen (also known as ‘The Brickworks’). I had suggested a start time of 12:00 which was to avoid the Ferry movements. These can always be checked on the Stena and Irish Ferries websites.  So I was a little surprised to see a bunch of yachts going out nearer 11:00 and then getting held up by the incoming Irish Ferry arrival time of 11:30.

One of the protocols, which perhaps our members should be reminded of, is that you should call Holyhead Port Control on VHF ch 14 to check for clearance across the TSS, I usually ask if there is any commercial traffic, which covers most of the larger vessels.

Once onboard Flair IV and waiting for my crew to arrive I got most of the preparation for the cruise done so that once onboard we were pretty much ready to cast off. With a nice 10kt - 12kt WNW wind we made good progress towards the harbour entrance and had a clear exit on our course to Carmel Head. There were two yachts sailing in much the same direction and perhaps we should have sailed closer to check on them but as the other group were not visible I was keen to get to Porth Wen before the tide changed so we ploughed on.

My crew for the day consisted of Luke and his friends Michael and Rebecca, it was Michael’s birthday and although they have sailed before on the great lakes, back in their home locale, the entertainment of wind over tide as we approached the area of Carmel Head came as quite a shock!

It was a beautiful sunny day and once we were through the disturbed areas and moving swiftly towards West Mouse. Following his father’s love of birds he was fascinated by the variety of birds we were able to see, Guillemots, Terns, Shearwaters, Cormorants and best of all for him was to see the Gannets as they circled and dived for their food. Middle Mouse, with its covering of guano, is great for viewing sea birds although with the flood tide carrying us past still at around 9kt SOG we didn’t get much time to concentrate on bird life.

As we approached Porth Wen we spotted Incantation on AIS some way East of the area and we could only see one mast in the cove until we had come right round the end of the headland. From our approach we could then see 3 more at anchor, Panther, Soulmate and Summer WIne. We rounded up near to Summer Wine and prepared to drop anchor in approximately 8m depth when were informed that Hellhound had got stuck on what was thought to be a lobster pot buoy hence the one boat on the eastern side of the cove. We turned and motored over to see what we could do to help. 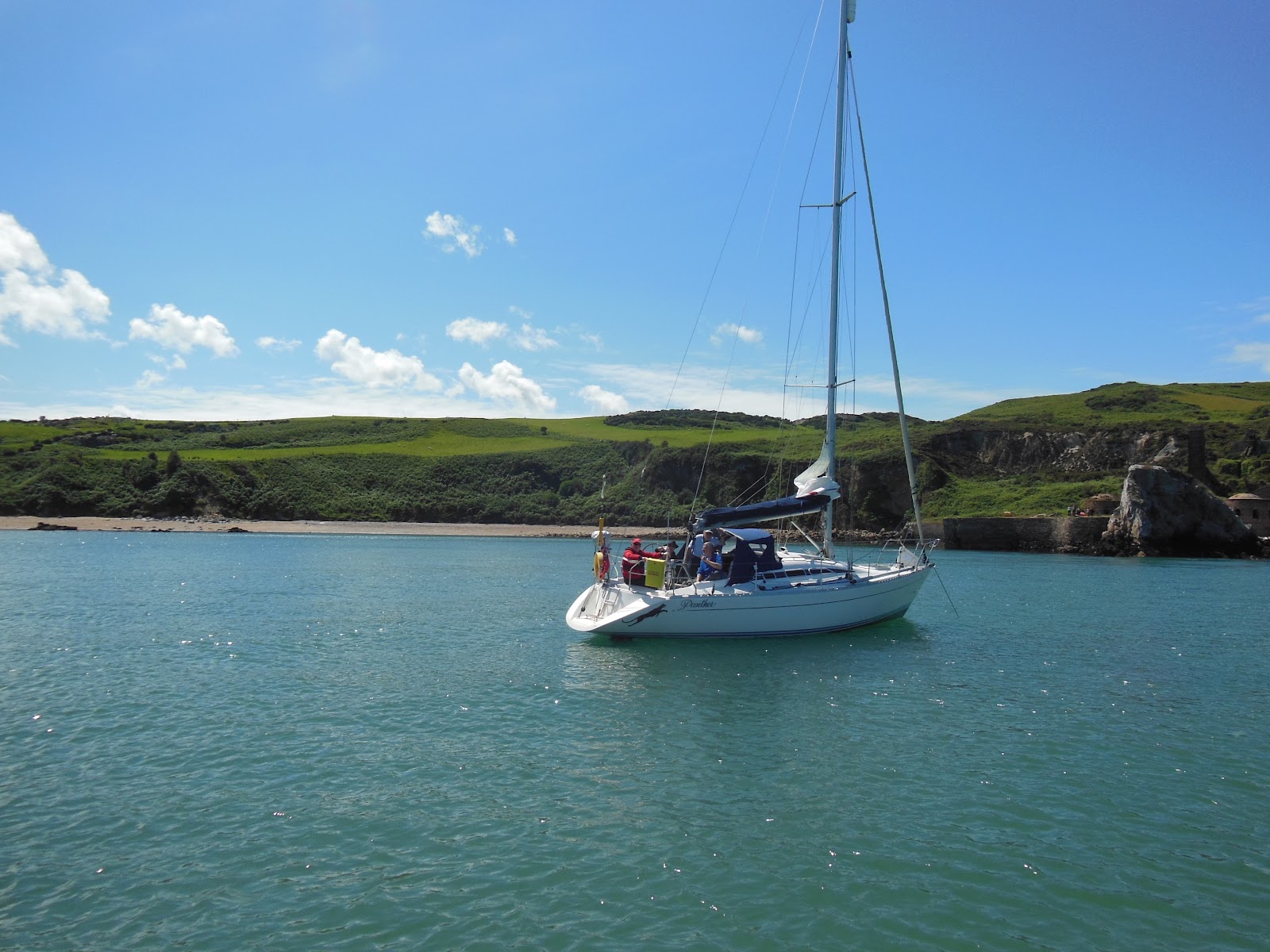 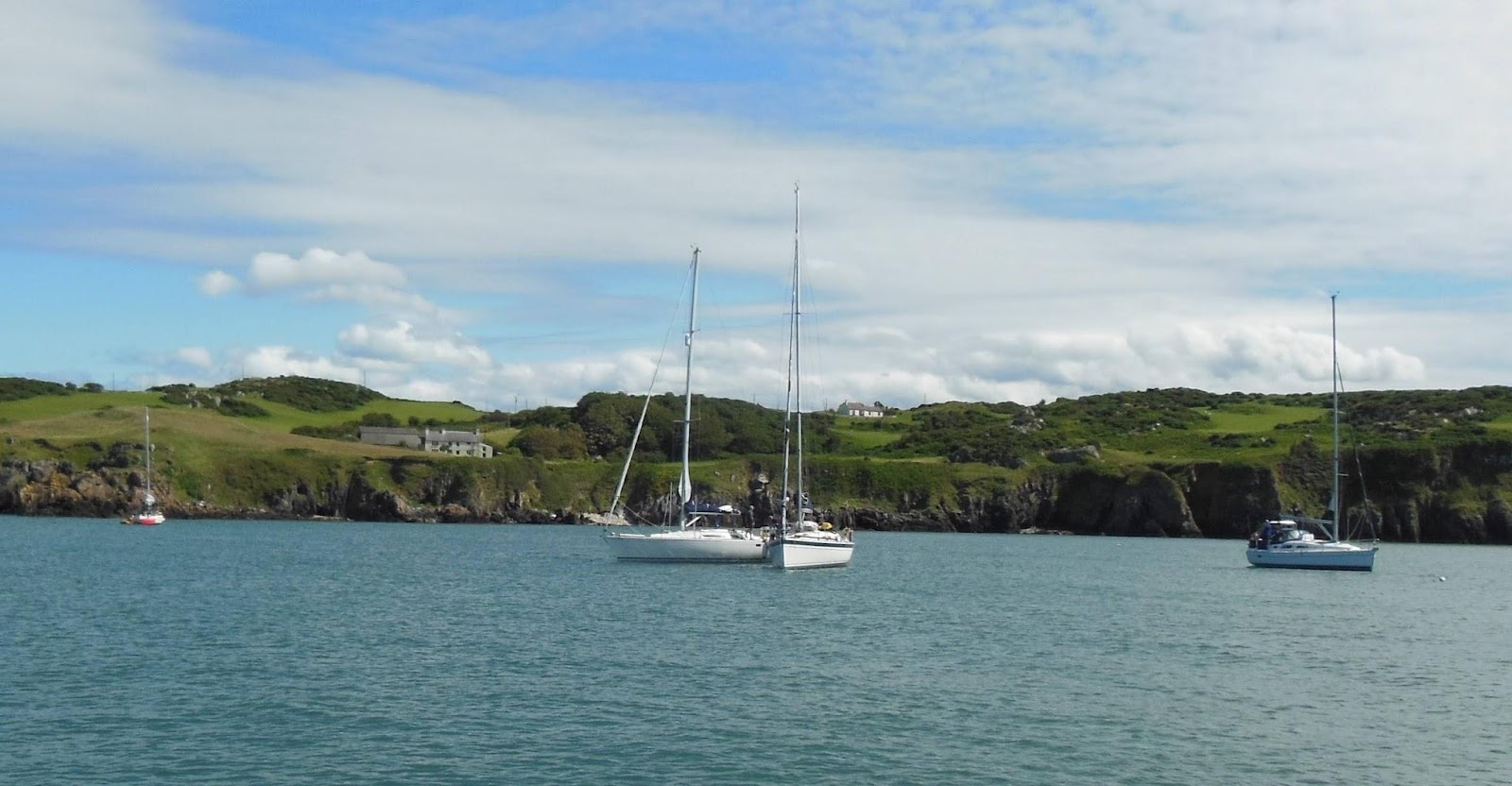 We rounded up near to Summer Wine and prepared to drop anchor in approximately 8m depth; that was when we were informed that Hellhound had got stuck on what was thought to be a lobster pot buoy hence the one boat on the eastern side of the cove. We turned and motored over to see what we could do to help.

Coming alongside we passed a tow rope and tried to pull Hellhound off from the stern, however she did not move and with the WNW wind blowing us over toward the lee shore we stopped the tow, reversed up and re-attached the line to Hellhound’s bow. As we attempted to pull again I noticed some issues with the Morse lever (the gear/throttle control) and Flair was not engageing reverse so we were unable to provide further assistance; leaving Jim with no option but to call the coastguard.

With the engine operating via the gearbox stuck in forward we went back over to moor behind Soulmate and alongside Summer WIne so that we could wait to ensure Jim got sorted out and we could finally have a quiet lunch at anchor. My crew then got a lift with Alan on his tender to go ashore to continue Michael’s birthday treat. Meanwhile I tried to see what had happened to the gear mechanism but unfortunately I wasn’t able to make anything work.

Soon Incantation was seen coming into the cove and came alongside us but then was called to the next drama, to help pick up a handheld radio which had been dropped off Summer Wine.

Soon Incantation was seen coming into the cove and came alongside us but then was called to the next drama, to help pick up a handheld radio which had been dropped off Summer Wine.

While this was happening the next entertainment was the arrival of the Moelfre Lifeboat to assist Hellhound off what we had realised was not a pot marker but a mooring buoy. We had the company of the Coastguard Pickup with flashing blue lights above the Brickworks, all very dramatic! 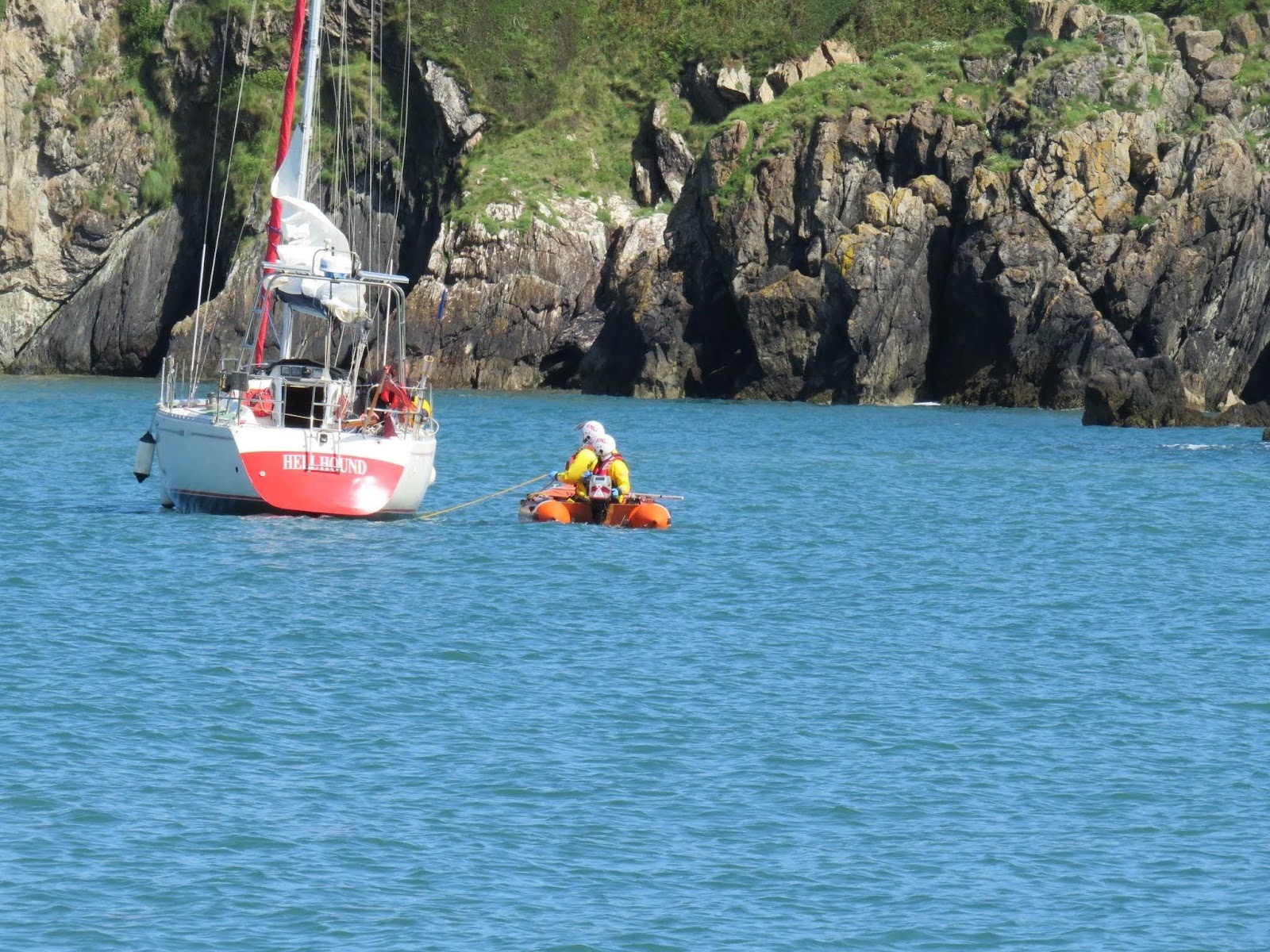 Of course with the lockdown many of the buoys are covered in seaweed and not easy to spot so note to all keep a watch out for buoys close to shore! 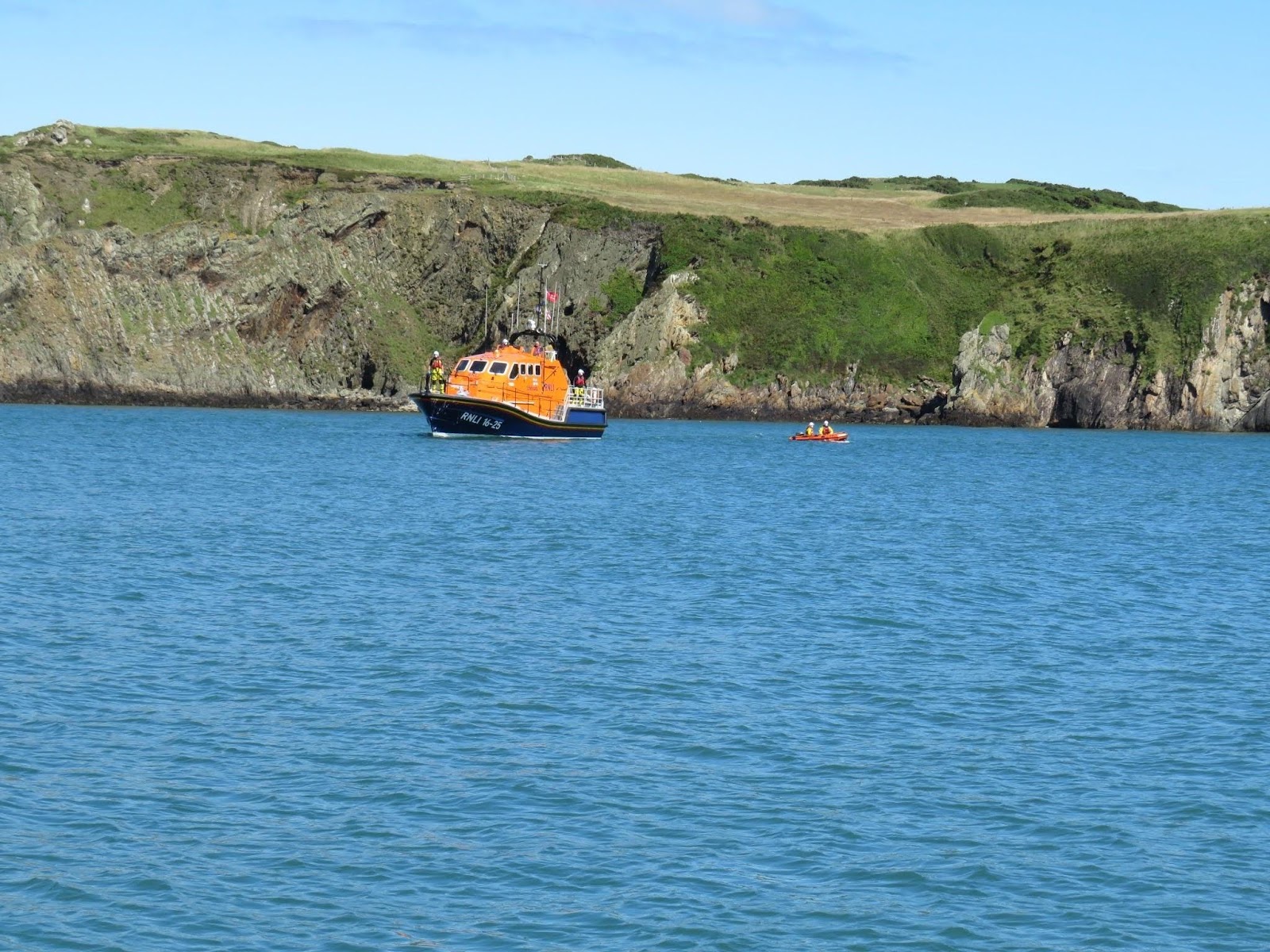 Once my crew were back on board we prepared to set off only to find that now the engine was refusing to start! What a litany of disasters!

Not to be left behind we raised the main and edged forward to raise my CQR anchor and then sailed off on port tack out from the cove. We were the last boat to leave and the others were now well out to sea leaving Middle Mouse to port, we, on the other hand, tacked to gain the push from the ebb tide passing between the island and the mainland.

The RNLI Moelfre lifeboat towed Hellhound into Cemaes, although it sounded like Jim was having an issue or two with maintaining radio contact with the Lifeboat Crew. 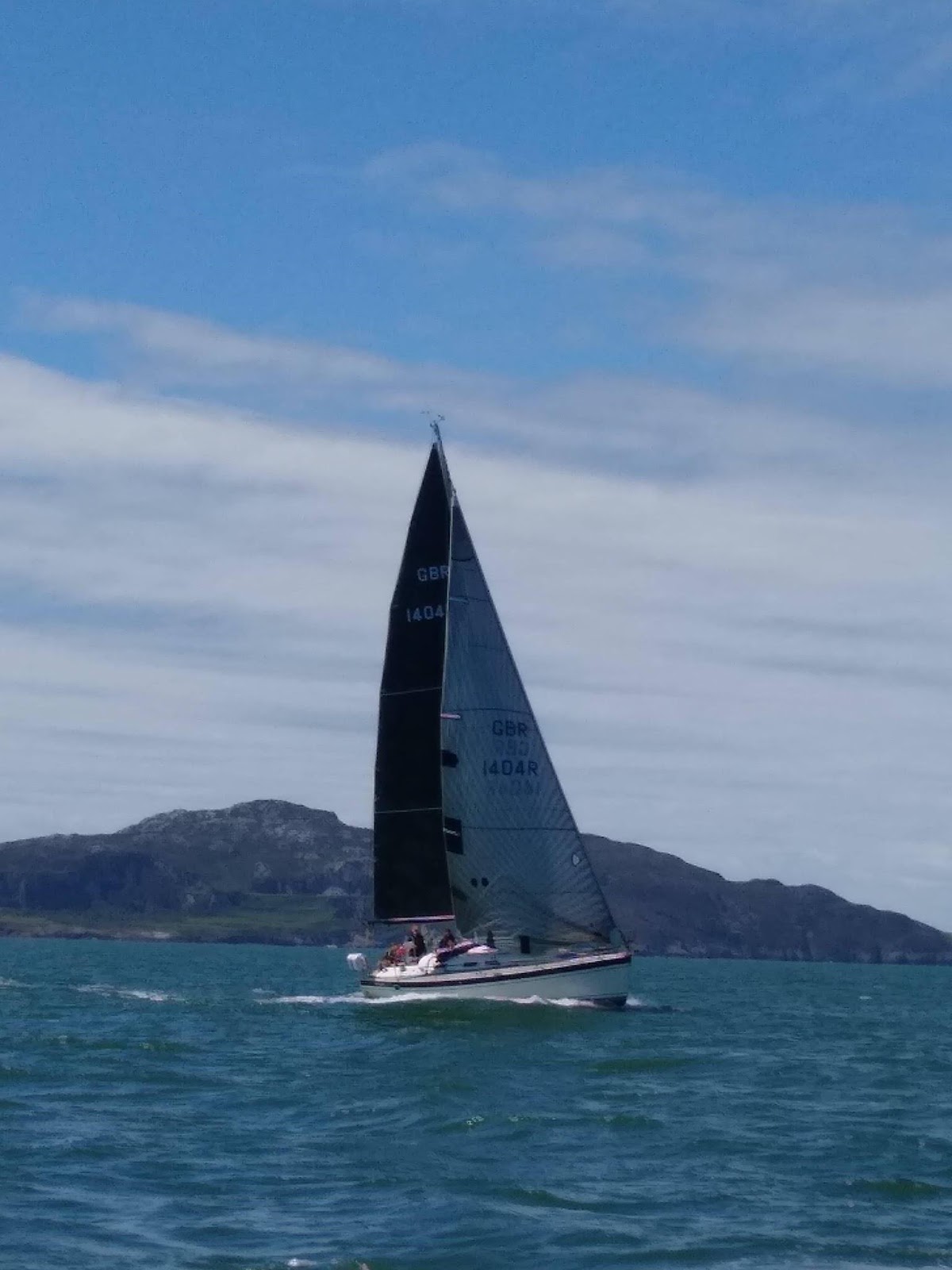 Continuing to tack upwind westwards we pulled ahead of the other yachts and once passed Carmel head and the rough water the winds died down a little but there was enough to ensure that we got back into the harbour and so were able to sail onto Flair IV’s mooring unaided. However it was now getting a little late and we packed up quickly so as not to delay the launch service too far past its finish time. Thanks to Colin we all got successfully taken ashore at the end of a wonderful, exciting day. Thanks to Liz and Roy for sharing their photos and everyone for the overall entertainment!

By the way Hellhound made it back to her mooring in Holyhead, so congratulations to Jim for his tenacity…

Here's looking forward to the next opportunity once my Morse gear level and control cables have been replaced by Stuart Marine. This link will take you to the album of photos of the event: Cruise in company No 1 2020